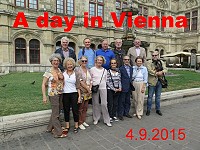 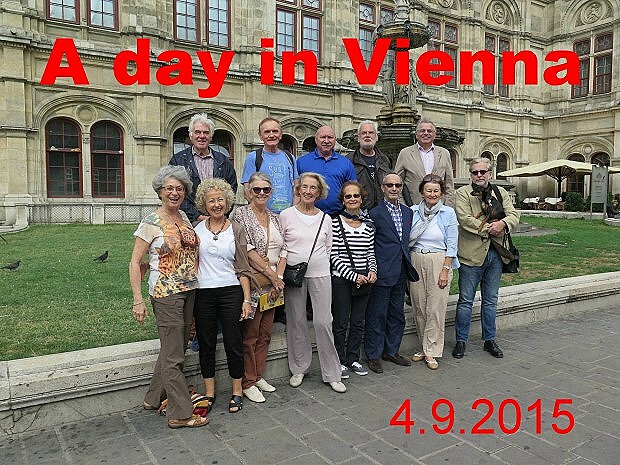 Vienna Sightseeing Tour for our guests of honour from England, Scottland and Canada

Friday, September 4th, a visiting tour for our international friends was scheduled. President Senator h.c. Wolfgang Steinhardt picked up the guests at 9 o‘clock in the morning at the Parkhotel Schönbrunn and together they used the underground to come to the starting point of the tour at the Vienna Opera House. Oliver, Christoph, and I met them there to act as personal assistants.

After the initial hellos we took the “Hop on Hop off“ bus to ride along the Ringstraße with its magnificent buildings.

After we returned to the opera a little walk to the Schwedenplatz was scheduled. It is not easy to keep a group of 14 people together among all those masses of tourists in Vienna along the Kärntnerstrasse and the Stephansplatz. At the shipping pier additional support was provided by Prof. Hans König and Ludwig Brunner who looked impressive in his captain‘s uniform and was a much sought-after photo model for young and old. 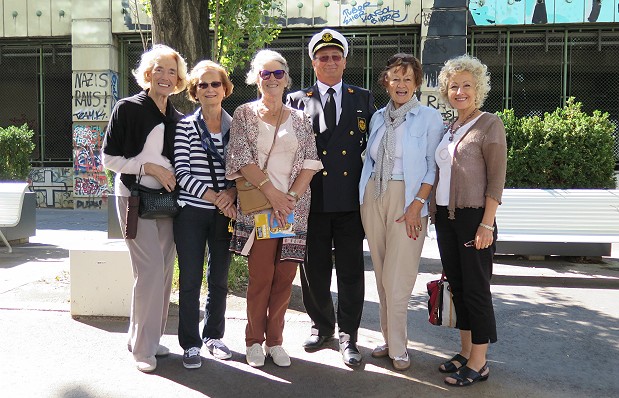 With the excursion boat “Vindobona“ we went downstream along the Donaukanal until the Freudenau locks and then back on the river Danube, passing Vienna‘s Buddhist temple, the “Marina Vienna“ and back to the Reichsbrücke where we left the ship again.

With the underground we returned to the Stephansplatz and visited St. Stephen‘s Cathedral. Led by Prof. Hans König and provided with experienced explanations many sights could be admired. As the surprise of the day our guests were invited to a coach tour and made a short round trip through beautiful Vienna. Back again at the opera we mounted our own cars and drove to Castle Kreuzenstein, our titular seat. There a castle tour was scheduled where the old kitchen, armoury, great hall, trophy room, and bedroom could be visited.

Now everyone was exhausted and we sat down in the castle tavern to enjoy various “medieval“ specialities and engaged in small talk.

Then the landlord had a rare and exceptional surprise for us. A young four-month old gyrfalcon was presented to us, the animal saw so many people for the first time. Slightly nervous he endured the presentation finally. A fantastic and wonderful animal.

Now the day was over and we returned our tired guests to their hotel back in Vienna.

During the dive back home, Ludwig even had four ladies in his car, everybody sung along with Fats Domino, By My Gust, Elvis Presley and Bill Haley with Choo Choo Ch` Boogie. In my car there was a really good mood.

The day finally ended with a good-humoured nightcap at the hotel bar.

Carol Goldman, David Douglas, Paulen and Colin Lee, Shiela Mundel, Meggie and William Firth, Andrea Cassel, David and Liz Johnston from Scotland. When the latter were speaking their own dialect I was unable to understand a single word, fortunately they showed mercy and spoke purest English so I was able to talk to them.