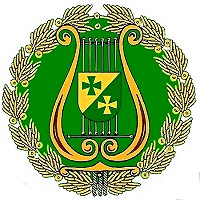 Course of the Ceremony

The Great LAZARUS UNION Tattoo is based on historic and traditional elements. It shall explicitly be no “military“ but a “traditional and ceremonial“ frame or closure of a large ceremony (e.g. investiture, inauguration and discharge of LAZARUS UNION dignitaries, honour for special guests, etc.).

The introduction depicts the marching band, approaching from the distance together with the camp guards, as they might have sounded around 1700. Drums, quiet at first and then louder and louder, accompanied as it was common by then by flutes, oboes, clarinets, and trumpets, play the tattoo from those times. A drum roll leads to the old Austrian bugle signals “Habt Acht!“, “Vergatterung“, “Sturm!“, “Beschleunigung“ and “Attacke!“, played by two solo trumpets. Then drummers play the Retraite and the signal “Last Post“ is played in concertante performance. Two marches round up the first part (the “Lazarus Union Marsh“ by Johann Hausl and the “UN Marsh“ by Robert Stolz).

First the “prayer“ is taboured, then the band plays “We Gather Together“. Now the bugle signal calls for prayer and the commanding officer of the ceremony calls for attention. The uniformed units knee down in parade mode and the soldier’s song “Battle prayer“ is sounded after the solo trumpet sounds from the distance. Finally the troops are released and from the distance the solo trumpet sounds the signal “Last Post“.

A bridge passage leads to the climax of the ceremony: the troops are commanded “attention“ while the national anthem and the county anthem are played. After a fanfare and the closing sounds from the solo trumpet the orchestra closes the musical ceremony with drums. The commanding officer reports finishing the act and asks for further instructions.

Background and what is a Great Tattoo?

The “Great Tattoo“ (in its original meaning) today is performed by music bands or military bands at ceremonial civilian or military occasions like big anniversaries or army graduation parades.

The “LAZARUS UNION Grand Tattoo“ holds similarities to the Austrian or German “Grand Tattoos“, especially the sequence of certain musical parts with the same purpose (hymns and marches).

Fixed parts of the “LAZARUS UNION Grand Tattoo“ are the “LAZARUS UNION March“ and the “Knight’s March“ at the begin. To substantiate the international connection of the LAZARUS UNION with the United Nations the “UNO March“ is played in the middle section. The corresponding county Hymn and another traditional march, usually from the region, are included on a variable basis.

Like in other European armies, the tattoo dates back to the Thirty Year’s War. Since the 17th century it is used to indicate by music the time to return to the barracks.

Sutlers had to end the convivial carousing of the soldiers by striking the taps of the casks with a stick, indicated by a drummer’s signal. This drummer’s signal was later replaced by a horn signal which – like all signals of the Imperial Austrian Army – is considered to originate from Michael Haydn.

With time this military action indicating the curfew mutated into an own ceremony where various military musical pieces were played. The ceremony of the Tattoo (German “Zapfenstreich“) was regulated in the Austrian Army for the first time in the infantry regiment Graf von Lacy in 1769. Since then various forms of the performances of the “Great Tattoo“ are used by the Austrian Army.

So in 1853 in Olmütz a Great Tattoo, which was very similar to today’s versions, was performed with 13 infantry, 13 Jäger, and 11 cavalry bands under the personal direction of the by then army bandmaster Andreas Leonhardt in front of Emperor Franz Joseph I, Tsar Nikolaus I, most archdukes of the monarchy, the princes of Prussia, Bavaria, and Württemberg and many domestic and foreign officers.

The Austrian Army has also taken up this tradition again and during military ceremonies performs a Great Tattoo. In 2018 the LAZARUS UNION has decided to have its own “Great Tattoo“ and ordered Friedrich Lentner to arrange this “Zapfenstreich“.

The Zapfenstreich originated in the military as a sign of the end of daily activities in both field and garrison. The term was mentioned for the first time in 1596. The Saxon major Hans von Fleming described this military custom for the first time in detail in his book Der vollkommene deutsche Soldat (The Perfect German Soldier, 1726). The Zapfenstreich was a trumpet signal to end the selling of liquor in the military quarters and to prepare for lights out. To underline that order, the sergeant major walked across the military camp and struck the taps of the casks with a stick. The word Zapfenstreich (“tap strike”) is similar to the Dutch “tap toe”, from which the English word tattoo comes. (The term is unrelated to the Tahitian origins of an ink tattoo.)

In 1813 the Prussian king Friedrich Wilhelm III witnessed the evening ceremony of the Russian army after the battle of Großgörschen near Berlin. He was deeply impressed of the religious parts of the ceremony, especially a choral version of the Lord’s Prayer. The king ordered that a similar ritual be incorporated in the Prussian Zapfenstreich. In 1838, a Zapfenstreich in nearly its present form was prepared by Wilhelm Wieprecht, director of music of the music corps of the Prussian Guard Corps, who arranged a great outdoor concert for the king and his guest, Tsar Nicholas I of Russia, in Potsdam. On 12 May over 1,000 musicians performed the Prussian tattoo signals, a newly composed tattoo march, and the choral “Ich bete an die Macht der Liebe” (“I pray to the power of love”), composed by the Ukrainian musician Dmytro Bortniansky with text by Gerhard Tersteegen.

After the founding of the German Reich in 1871, the emperor’s hymn Heil Dir im Siegerkranz became part of the Zapfenstreich, but only when the emperor was present at the ceremony. Following the German Revolution the new national anthem, the “Deutschlandlied” by Hoffmann von Fallersleben, replaced the old imperial hymn in 1922. When foreign heads of state or military units are honoured, their respective national anthems are played. 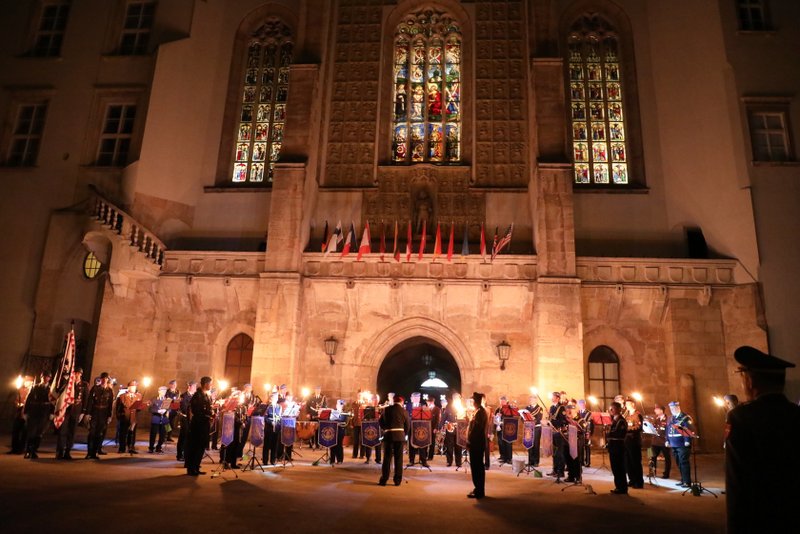 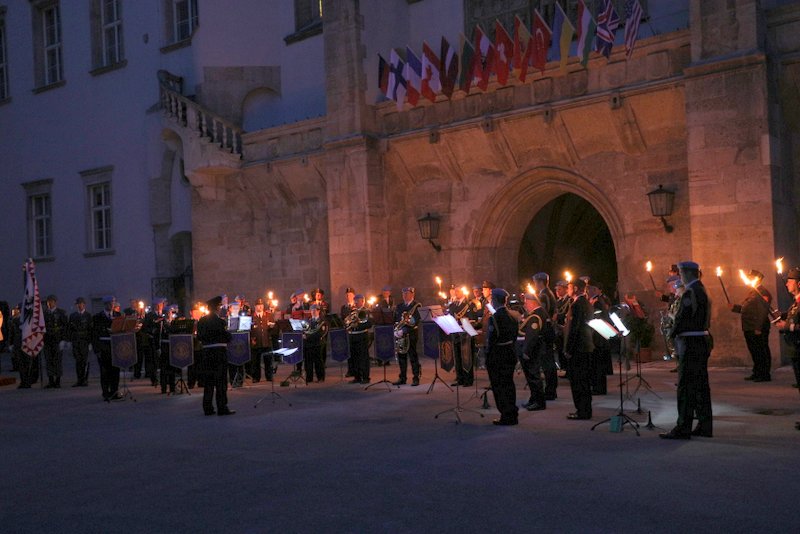 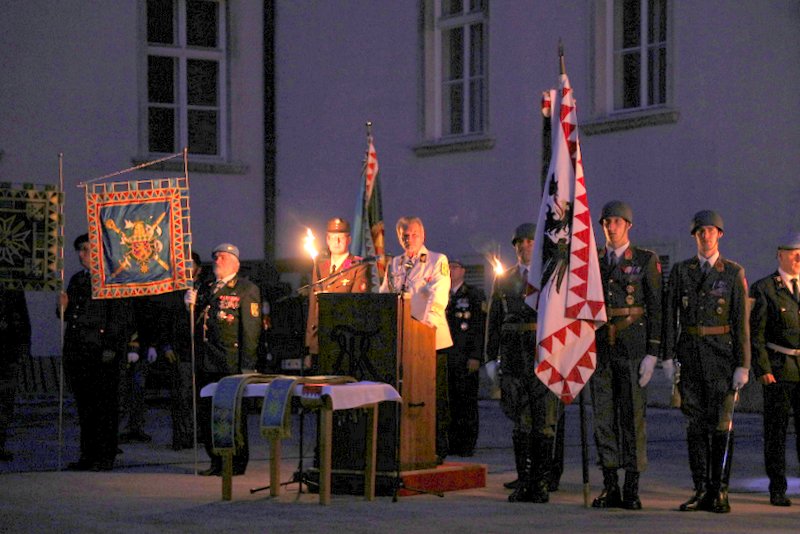 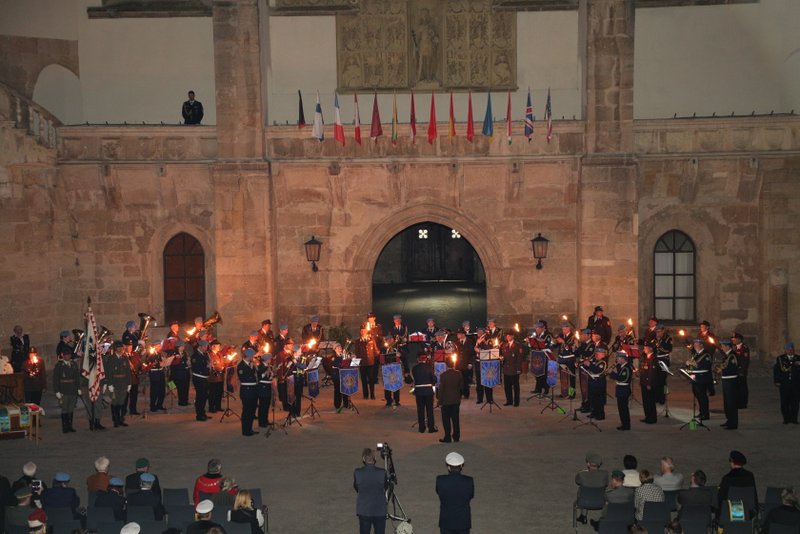 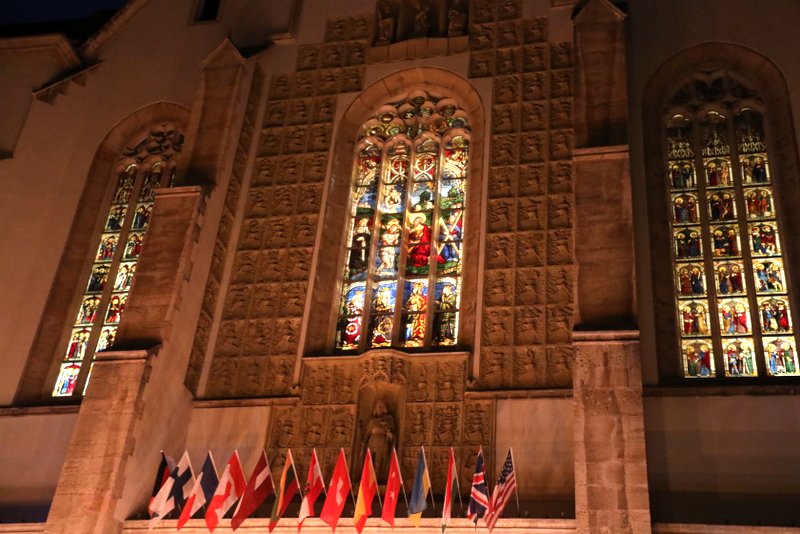 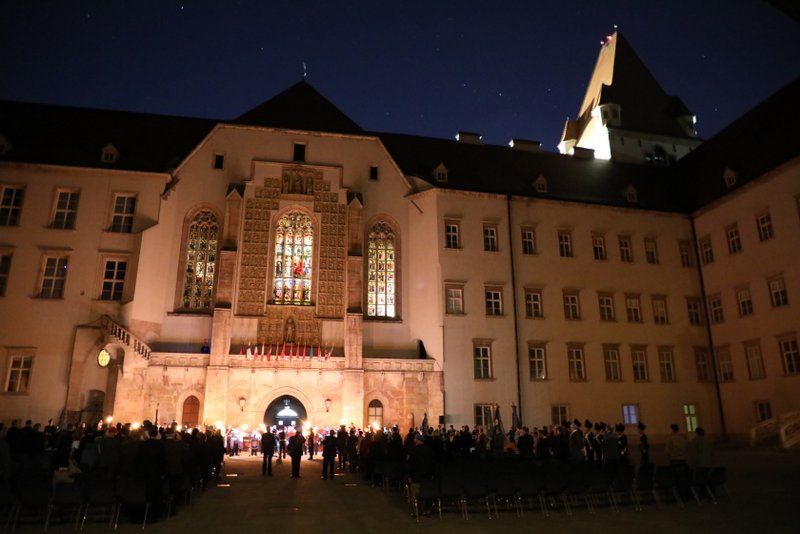 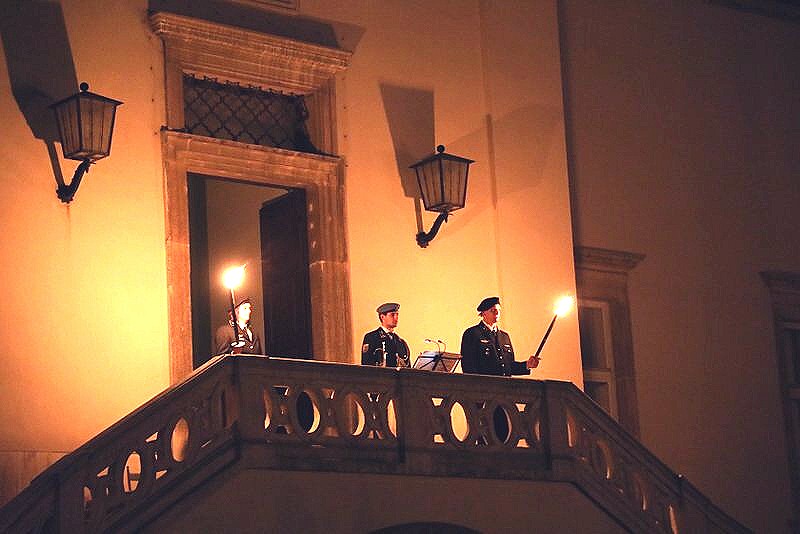 All notes of the “LAZARUS UNION GRAND TATTOO“