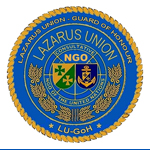 of the Honour Guard of The Lazarus Union

The name Honour Guard symbolises the principles of our organisation.

The word “Honour” describes a certain inner feeling and consequently a certain outward behaviour towards other individuals and groups (associations). In particular, when dealing with the insignia of the Lazarus Union, this feeling of honour should be in the foreground and impose on all members a very high standard of behaviour.

The word “Guard” also illustrates its purpose. It stands for the preservation of our honourable insignia and the stipulated purpose of the Community of the Lazarus Union – the practice of common humanity.

Candidates for the Honour Guard should, from the outset, be clear about its responsibilities. If there are mental or physical obstacles to acceptance, the candidate can voluntarily relinquish his/her candidacy. Mentally, the candidate should have the necessary knowledge to appreciate the events of our association, to study the ceremonies and witness them sympathetically. Physically, the candidate should be able to drill for certain periods with or without a banner. To this end, there is no age limit! If the above-mentioned conditions exist there is no obstacle to appointment, the candidate may join the Honour Guard and be able to procure the uniform (for external identification of his/her affiliation).

Members of the Honour Guard must behave within the association according to the principles of the Lazarus Union. Their activities are balanced and coordinated by the Commander and his Officers. For example, allocating functions at events for which members have volunteered (i.e. Standard-Bearer, Bugler, Escort Officer, Group Commander, etc.). In addition, it would be commendable if members of the Honour Guard would actively contribute, beyond their voluntarily assumed services, at the various other significant events of the Lazarus Union (e.g. flight days, etc.).

As an outward visible sign of belonging to the Honour Guard, each member wears the Guard lanyard on the right shoulder of the tunic. The lanyard symbolizes the member’s affiliation to our elite group and therefore essentially represents our reputation.

Should a member of the Honour Guard, for professional, official or health reasons, no longer be able to participate in events as a Guard, he/she can apply to the Commander for an honourable discharge from the Honour Guard. After acceptance of the resignation, the Guard lanyard must be given back to the Guard Commander.

Where a Member is unable to participate in events for health reasons, but would nevertheless like to retain a connection with the Honour Guard as a member because his/her heart is still with the Guard, this will be permitted as a matter of course and noted by the Commander.

In the case of dishonourable behaviour by a Guard, or Guards, the Commander will first issue a warning order. Repeated misconduct will result in exclusion from the Honour Guard. Here the Guard lanyard is removed immediately.