The CSLI is open to all people, no matter the ethnic affiliation, religion, social status, sex, age and whatever membership to associations, societies and Orders, as long as these accept and follow the principles of ecumenical, humanitarian, brotherly love according to St. Lazarus.

Everyone who feels connected to these goals and is ready to work for these ideals, will be cordially welcome in the CSLI. The CSLI herewith declares a commitment of neutrality regarding all groupings of the Order of Lazarus and will not take sides in any issues.

The CSLI regards itself as an international welfare organization for all groups of the Order of Lazarus and will cooperate in friendship with all these groups on an international basis if desired. The CSLI commits itself to reconciliation, tolerance and brotherly love.

This policy statement is established and anchored in the statutes of the CSLI and can only be changed or amended by a majority of 75% of the members in a General Assembly. (See also Section 19 of CSLI-Statutes) 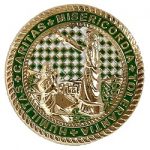 According to the Gospel of John, Lazarus and his sisters Martha and Maria were special friends of Jesus Christ. Jesus cried when he learned that Lazarus had died. He then travelled toBethanyand raised Lazarus from the dead (John 11: 1-45). The same story, significantly expanded, is also told in the apocryphal Secret Gospel of Mark.

The rich man in the parable has been interpreted as representing the religious elite ofIsrael. This elite was considered to be falsifying God’s word and so would not enter into theKingdomofGod, but be sent to Hades.
Lazarus has been seen as representing materially impoverished people with the rich man symbolizing rich people. The rich suffer torment in Hades, according to this interpretation, because they do not sufficiently help the poor. habe.
Lazarus comes to the bosom of Abraham solely because of his poverty. Since this is the only place in the Bible which talks of torment in Hades, this is sometimes seen as the image of Hell.

Because of its clear and unambiguous position, the LAZARUS UNION got “attacked“ from various sides. All the more we are glad that practically all of our “five demands“ (see above) we raised already in October 2015 are being implemented by the responsible authorities, thus allowing reason to prevail once again! Raising false hopes in the refugees and asylum seekers only leads to disappointment, frustration, and finally also to aggression. The guideline shall be to help wherever necessary but with sense and feasible resources. It does no good to anybody if the “mood is turning around“!

Finally a word on our position regarding the “culture of welcome“:

It is an obligation of civilised states to respect and to live human rights. Of course this does include acceptance of asylum seekers! If not permanently then at least for some time.

Yet we refuse to share the “joy decreed from above“ that “finally the strongly desired refugees“ also are with us and we strongly protest against being considered xenophobic or even worse.

Three reasons we are not pleased at all:

We are not pleased that there is so much war in this world and that man is not able to live together with his neighbour in peace and respect, respecting, understanding, and accepting each other.

Even if we are not pleased we must do what we can within the scope of our possibilities to help. This is our duty as humans!