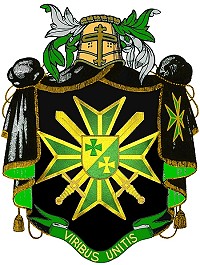 Knighthood of Honor of the Lazarus Union

Based on Article 05 of the Statutes of the Lazarus Union

Established according to the resolution from the Grandmaster in October 2020

The Knighthood of Honor of the Lazarus Union recognizes that even today the virtues of old knighthood have lost nothing of importance. To strive for it, to act and to encourage others to do so is more than ever to be seen as necessary, even in times we are experiencing today.

As part of a voluntary, humanitarian, charitable and global organization, the Lazarus Union’s Knighthood of Honor also seeks to make a breakthrough on these chivalrous virtues (faith, hope, love, mercy, wisdom, justice, bravery and moderation) wherever possible and does so by the symbolic “Knighthood of Honor”.

(2)   It is located at the place of the respective Grand Master and extends its activities to all the States of the world.

(3)   Titular castle of the Knighthood of Honor is the Kreuzenstein Castle in Lower Austria.

Insignia of the Knighthood is a green eight-pointed cross with crossed swords on the green ribbon. In the middle of the insignia there is a small shield of arms in yellow and green, with two small crosses (= emblem of the Lazarus Union).

Knights of Honor also wear a black mantle with a black velvet collar and the symbol of the Knighthood of Honor fixed on the left shoulder of the mantle. Knight Expectants wear the ordinary mantle only with the two-colored emblem of the Lazarus Union.

Members of the Knighthood who do not belong to any Christian faith wear insignia without crosses or other Christian symbols. In the middle of the emblem there is only shown the awakening of St. Lazarus and our four principles of “tolerance, humility, mercy and charity.

§3
Purpose of the Knighthood of Honor

(1)   The knighthood that acts as a non-profit organization pursues exclusively and directly charitable and ecclesiastical purposes.

(2)   The purpose of the Knighthood of Honor knighthood is, in particular, in respect of and following the more than eight hundred-year-old tradition of the Order of Knights of the Middle Ages and their successor institutions, the care and promotion of international understanding, the understanding between the recognized religious communities, the promotion of youth and elderly assistance, public health, humanitarian goals, the environment and the financial support of persons in need of help in the sense of Saint Lazarus.

(3)   In order to achieve these purposes, the members of the Knighthood of Honor are obliged to work for these goals personally by chivalrous behaviour in all situations.

§5
Obtaining the admission into the Knighthood

This “Godfather” makes the application to accept the candidate as “Knight Expectant” and “accompanies” this candidate until the final admission to the Knighthood of Honor.

(3)   The candidate will then be accepted as an “Candidate for Knight or Dame of Honor” or “Knight or Dame Expectant” and can then prove himself in a (temporarily indefinite) “observation phase”.

(5)   After a further period of observation, the final acceptance into the Knighthood of Honor of the Lazarus Union can be applied. This request can either be made by the candidate himself, or three Lazarus Union Staff Officers can make the application on behalf of the candidate or his/her “GODFATHER” makes the request to the Chapter.

The observation period gives the Lazarus Union and the Chapter, but also the candidate the opportunity to undergo an “examination period” for each other to get to know each other better and also to determine whether the mutual expectations are also true in order to avoid any wrong decisions concerning the final admission to the Knighthood of Honor of the Lazarus Union.

(7)   Early termination of the “observation phase”

This status of “candidacy” can be withdrawn by both the candidate himself and the chapter by a simple majority without a reimbursement of costs incurred, without giving reasons and without any further consequences. In this case, all insignia received must be returned to the Lazarus Union, whereby the costs incurred will be reimbursed if this items are returned safely.

(8)   The insignia within the “observation phase”

As an external sign, the “Expectant” receives the neck cross of the Knighthood of Honor (without exaggeration (trophy) and the cross arms without investiture ceremony. The Officer’s sign has the same kind like the cross but is used as a chest cross. For this purpose, the “Simple Mantle” (= Knight’s mantle without the emblem of the Knighthood of Honor) with the CSLI emblem is used . The acquisition of the insignia and the mantle are in this case an essential requirement.

An Investiture Ceremony usually consists of the following parts:

§7
Admission of the Knights of Honor

(1)   The Investiture Ceremony of the Knights of Honor is a continuation of the traditional accolade. The “attitude” that stands BEHIND this accolade is MORE IMPORTANT than the ceremony itself. It therefore does not claim authenticity, nor should similar ceremonies of other associations and organizations be “imitated”.

At the Investiture Ceremony, candidates do not have to kneel before the “Grand Master” and similar “notables” if they do not belong to the clergy of a religious community while getting the accolade.

(3)   The Grandmaster opens the Investiture ceremony:

(4)   The candidate is called by the Master of Ceremonies and, after mentioning his name, appears before the semicircle. During the TOTAL ceremony he remains there. “Dear ……. (here the forename is used!), you have been unanimously and after secret vote deemed worthy by the chapter of the CSLI Knighthood of Honor to belong to our community as ………. (here the rank and the position will be mentioned in which the candidate will be accepted or promoted). Step forward!”

(5)   The Grandmaster asks the candidate whether he would like to be a member of the CSLI Knighthood of Honor with the following words:

“I therefore ask you in front of the assembled congregation: Do you want to be of your own free will as …….. (here the rank and position where the candidate is accepted or promoted will be mentioned) a part of our community and to acknowledge our principles?”

“I want it with all my heart!”

(7)   The Grandmaster asks the candidate:

“Are you aware of what it means to be a member of this community?”

“Receive now the outer signs of your new dignity. May these signs always remind you of the eight virtues of a knight and may you give you the strength given the strength to act accordingly.”

“By virtue of the office entrusted to me, you are a member of our Knighthood of Honor and I hereby I welcome you fraternal among us.”

(12)     The Grand Master hands out the sword back to the sword bearer and gives the new Knight of Honor triple brotherly (right, left, right).

(13)     If a priest is present and the candidate wants to he will stand before the priest, kneels down and asks for the blessing of God with the following words:

“I ask God for His blessing, that He may give me the strength to be also worthy of this high honor.”

(14)     After the blessing, the new Knight of Honor enters the semicircle of the knights after having received the decree (This Ceremony is for each candidate!) When all the applications have ended, the Grandmaster says the following prayer:

O Lord, make us the instrument of your peace,

that we practice love, where one hates oneself,

that we forgive where one is offended,

that we connect where there is conflicts,

that we tell the truth where the error reigns,

that we may bring faith where the doubt expresses,

that we awaken hope where despair is tormented,

that we may light a light where darkness reigns,

that we may rejoice where sorrow dwells.

not that we are comforted, but that we may comfort;

not that we are understood, but that we understand;

not that we are loved, but that we love.

For whoever gives receives.

Whoever forgets himself, finds;

Whoever forgives will forgive:

And whoever dies awakens to eternal life!

(15)     The ceremony has then came to an end. If it is possible and if the opportunity is available, this ceremony can also be decorated with music (f.e. CSLI Fanfare and CSLI March etc.)

(16)     In addition, the annexed application, which forms part of this order, shall apply.

§8
The admission of the Knight Expectants

(1)   The ceremony of the candidates for “Knight Expectants” or “Dame Expectants” usually takes place during the Investiture of the Knights of Honor but shall nevertheless be a very special moment in the life of the candidate and has the following procedure:

(2)   The candidate usually sits to the right of the “godfather” as far as there is enough space. The “Master of the Candidates” or the Protocol Officer applies to the candidate with the following words:

“Dear…….. ! Your “godfather” proposed to accept you as “Knight Expectant” (Dame Expectant) of our Knighthood of Honor and the chapter has answered this request. Step forward!”

“I ask you in front of the present Knights and Dames of Honor: Is it your free will to aspire the Knighthood of Honor in the Lazarus Union?”

“Now receive the outer signs of your new rank: the   simple mantle and the cross. May you prove yourself in your candidature in order to be finally accepted into our Knighthood of Honor and be welcomed!”

(6)   Then follows the brotherly kiss.

(1)   The membership of the Knighthood of Honor expires by death, by exclusion or by decision of the chapter to release the Knight/Dame from the affiliation. A unilateral exit is not possible.

(2)   A Knight/Dame of Honor may be excluded if he/she does not comply with his/her other duties established in this order or behaved dishonorably. In the case of dishonest behavior, the exclusion shall take place immediately.

(3)   The Knighthood of Honor of a Knight or Dame of Honor can only be denied by the Chapter (unanimously and secretly).

(4)   The exclusion must be notified to the member in writing, stating the essential         reasons.

(5)   The exclusion can be objected to within 14 days from the knowledge of the exclusion. The time limit is governed by the rules of civil   law. A simply registered letter is considered having been received seven days after having been sent by post. The opposition must be addressed in writing to the Grandmaster. The Grandmaster decides on the appeal. Until his decision, the opposition has no suspensory effect.

(1)   Each member shall be entitled to participate in all events of the Knighthood of Honor.

(2)   Each member may make an application to the Chapter.

(a) respect this order and any additional arrangements and to comply with the decisions and orders of the Chapter and the Grandmaster;

Organs of the Order are

(1)   The Grandmaster represents the Knighthood of Honor.

(2)   The Grand Master issues the Order of the Knighthood of Honor, which is only valid within the Lazarus Union and has no external Impact.

(4)   The Grand Master appoints the Chapter.

(5)   The Grandmaster determines the rank of a candidate who has been accepted into the Knighthood of Honor.

(6)   All awards and award levels, that can only be given by the Grandmaster, is given by him with the sole responsibility.

(7)   The Grandmaster is the only Knight of Honor to wear a red mantle as a sign of his dignity.

(1)   The chapter is appointed and dissolved by the Grandmaster.

(2)   The number of the members of the Chapter is determined by the Grandmaster.

§14
Tasks and responsibilities of the Chapter

(b)   discusses about amendments of this Order,

(c)   discusses the requests submitted in writing and submits a proposal for a decision to the Grandmaster,

(d)   advises the Grandmaster on honors and awards to be awarded,

(e)   prepares the Investitures, together with the Grand Master and assists him in its implementation,

(f)    selects a speaker who is the mouthpiece of the Chapter for the Grandmaster.