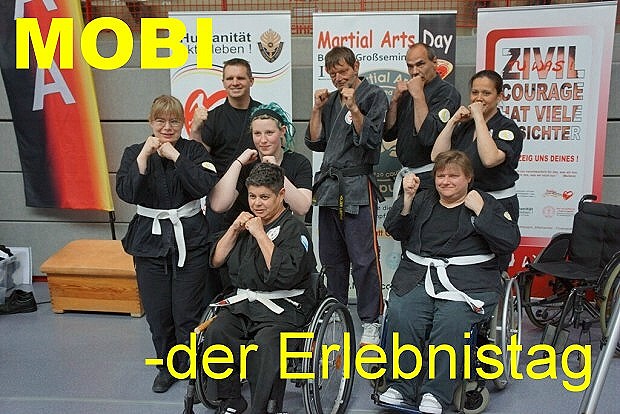 At “MOBI – the adventure day” in Flensburg, among other displays was one on “Self-defence for people with disabilities / wheelchair users”. In presenting this, Organizer Charles Grant cooperated with the “The Sword of Freedom”, CSLI, MAA-I and the SOK.

The gymnastic skills course, devised and performed by the sports students from the University of Flensburg, provided a buzz of activity during the event. The audience also observed with great interest the martial arts and self-defence for people with handicaps / wheelchairs demonstrated by the boxers of DGF Flensburg, the Capoeira Flensburg, the members of SOK Kampfkunstschule and the team led by Babak Philip Saviz with Holger Liedtke, Karsten Förster, Stefan Schmaltz and Bernd Cave’s tem. Many of the different exercises were not only performed, but practised by the audience, because that’s the motto of the MOBI day courses – “Getting involved was explicitly allowed “:-).

The go-kart track in front of the hall, with vehicles from Kartbahn Schleswig (Germany / Schleswig-Holstein), “Hadn’t been used so much in any of the preceding 4 years,” according to Heiko Jürgensen. In all, 198 trips were carried out. “There was less than 5 minutes break and our drivers had to alternate smoothly, there was such a rush this year,” said the team from RSC North.

The wheelchair parcours, supervised by the staff and students of the Handewitt Occupational Therapists School, also attracted keen interest, and the bull-riding machine from “Hoppla The Event Outfitter in Satrup” threw off a total of 285 riders.

The Wheel of Fortune, the “hot wire”, the face painting and the climbing tower operated by the DAV Flensburg, the highest in Germany at 8.50 m, also drew large audiences. The unusual recumbent bikes from the manufacturer “Hase” were marvelled at and extensively test driven, and the curling demonstrations by SV Adelby in front of the main entrance of the hall made viewers curious to know more about this relatively unknown sport discipline.

The Bequa Flensburg team hosted visitors, as every year, with cakes, ice cream, popcorn, coffee, cold drinks, etc., while in the outdoor area grilled sausages, crepes, smoothies and other treats were available.

The information stands in the gallery of the sports hall were the focal point for those interested in sports and health products but on the hour they had to speak a little louder there because then Tom Miller Elvis Tribute Artist, Kay Christiansen, Anna Sophie and Julian Taylor from Eckernförde, Samuel – 2nd place in “The Voice Kids” 2015 – and local hero Mike Kazmaier and his band gave us their best songs. The stage and musical performances this year were from PMN Events – excellently managed by the Ulf Dupke Event Production Team!

At the Floriansdorf KiEZ Frauensee booth, younger visitors and other guests were warned about the dangers of fire and told about the work of the Fire Brigade.

Political guests on site were:

Our special thanks go also to the volunteer team from Health Media g.e.V., all supporters from the patron city of Flensburg, the Flensburg professional Fire Brigade, the Red Cross and all other helpers, especially our tireless Benny Schatz Wieckhorst and Gesi Maus Hansen – with us for the 5th time this year. Without these this event, now grown to be the largest combination of sports, action and music in Schleswig-Holstein, would not be possible. 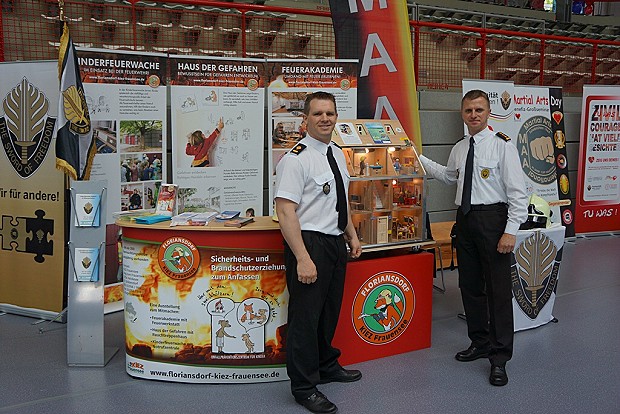 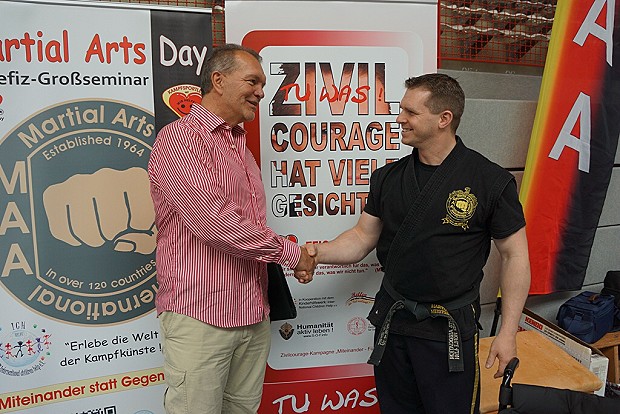 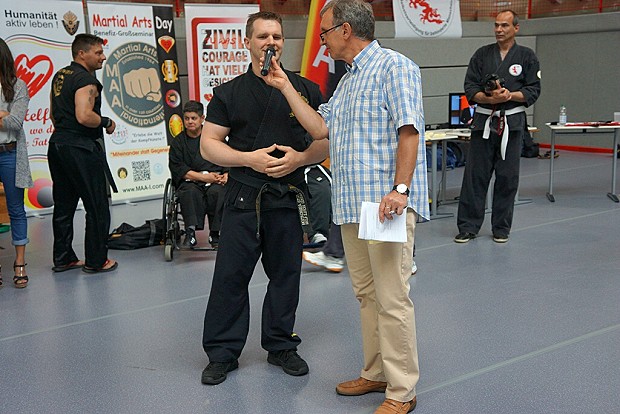 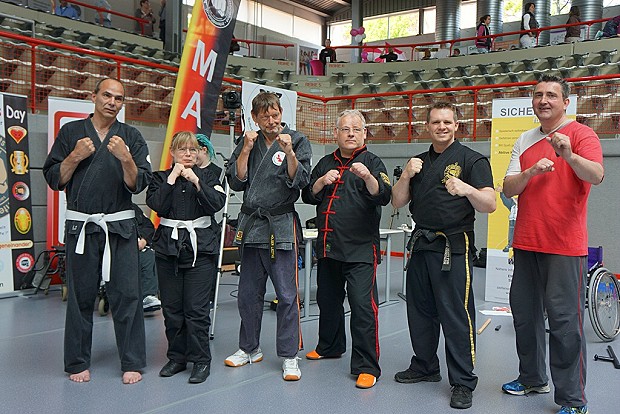 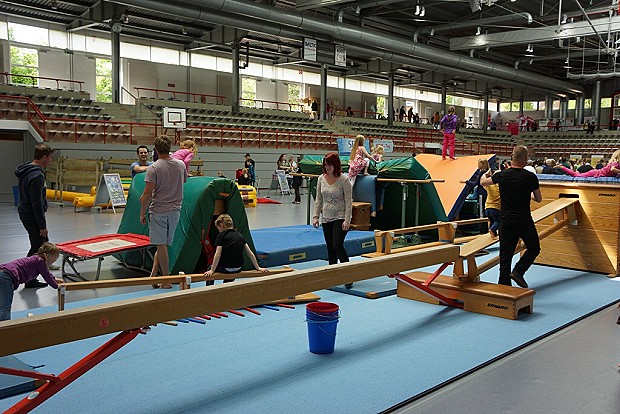 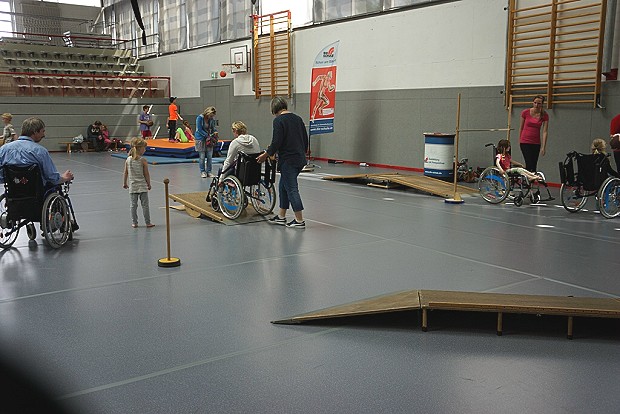 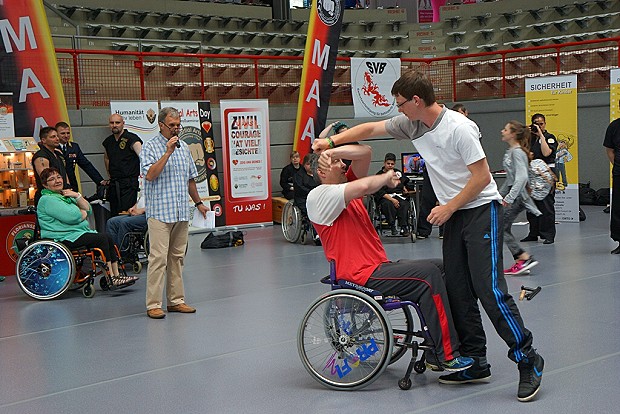 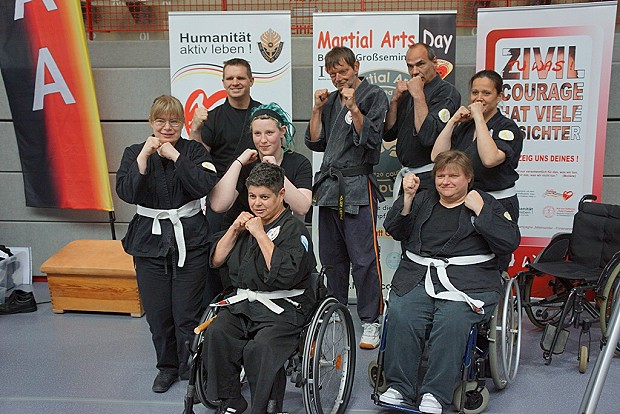 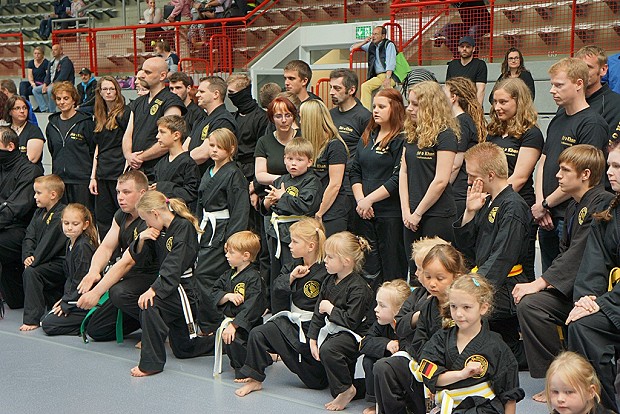 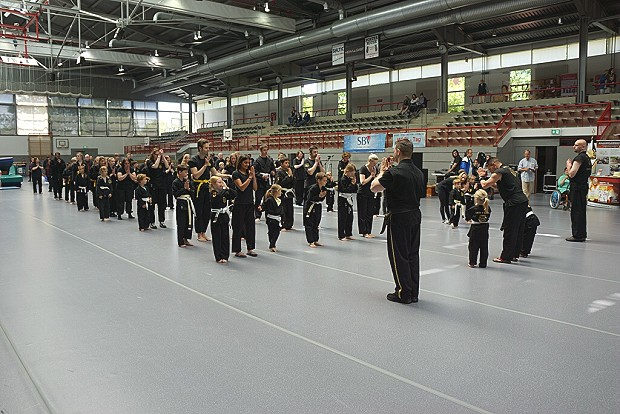 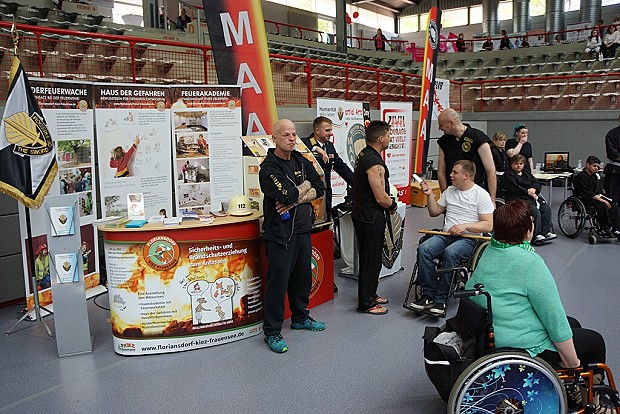 “Changing of the guard” in the refugee camp