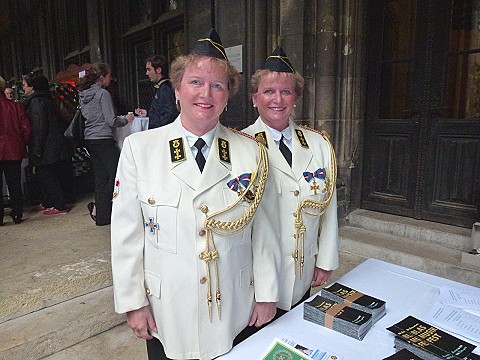 in the Arcade Court of Vienna‘s Town Hall A delegation of the Lazarus Union visited the festival concert given in the course of the 34. Austrian Brass Music Festival. The Viennese Brass Orchestra played waltz and polka melodies in the arcade court of Vienna‘s town hall to the motto “Viennese ballroom stories.“

For the first time three musicians participated from the Lazarus Union Music Corps, which is an official member of the Viennese Brass Music Association since May 15th, 2013.

The concert was opened with Karl Rosner‘s “Viennese Opera Ball Fanfare.“ Directed by bandmaster Herbert Klinger the orchestra consisting of various musicians from the association played a colourful variety of tunes, among others also from Strauß and Ziehrer. Besides our three musicians there were musicians from the Academic Brass Philharmonic Orchestra Vienna, the k.u.k. Viennese Regiment Band IR 4, the Vienna Police Music Corps and others. Our sutlers in their white gala dresses were responsible for guest assistance on request of the officials from Vienna‘s cultural town department.

Also some rarely performed compositions like the „Stefanie-Gavotte“ by Alphons Czibulka were played in front of an enthusiastic audience. Some tunes were accompanied by dancing performances presented by the waltz formation of the dancing school Ellmayer.

The evening was moderated by Dr. Friedrich Anzenberger, member of the board and scientific director of the documentation centre of the Austria Brass Music Association and general secretary of the International Society for Research and Support of Brass Music.

After several bonus tunes strongly demanded by  the audience the concert was closed – in the tradition of the New Year‘s Concert – with the Radetzky March.

On leaving the town hall all ladies were presented a rose as a ladies‘ gift.