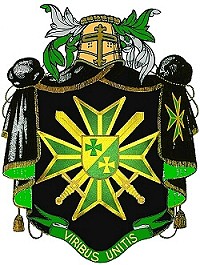 At the invitation of the Grand Prior of the Brazilian Grand Priory of the United Grand Priories of the Hospitaller Order of Saint Lazarus of Jerusalem, Dr.Oswin Hochstöger (Vice President of Corps Saint Lazarus Austria-CSLA) and I attended an investiture ceremony in Rio de Janeiro. Our host, GenLt CSLI Roberto Ortiz, is the CSLI Commander for Latin America and Brazil as well as Grand Prefect of the Lazarus Union Knighthood of Honour in Brazil.

The flight on 28.2.2013, fromVienna via Amsterdam to Rio de Janeiro, took about 16 hours so we were fairly tired on our arrival at Rio but waiting for us at the airport was Capt CSLI Marcos Antonio Penna, ready to guide us to our hotel.

The hotel was in the “Leblon” district, a very safe and pleasant area. From the hotel room we had a direct view of the Corcovado Christ statue and the hotel also featured a large swimming pool on the roof.

For the next day, discussions and preparatory meetings had been planned with Roberto Ortiz. Procedings concluded with ‚snacks’ of ten different, deliciously prepared, beef products. Costing very little for as much as we could eat, these were greatly enjoyed.

The Investiture itself lasted over two hours, not only because the founding of the new future “Agnus Dei” and the establishment of the Grand Priory of Brazil meant the officials had to be sworn in, but also because many recordings and awards were also made. I myself had the great honour to act as Head of the Investiture, representing the Grand Chancellor of the the Hospitaller Order of Saint Lazarus of Jerusalem, Dr. Max J. Ellul from Malta.

The closing gala luncheon following the Investiture echoed to the friendly sound of many comradely discussions.

We visited, among others, the National Theatre, the famous “Sambadrome”, the modern 145-meter-high modern Cathedral of Rio de Janeiro with a capacity of 20,000 people and, of course, the Corcovado and the blessing – the huge statue of  Christ at the summit.

We also drove throughRio’s “favelas”, or slums, but getting out of the car wasn’t recommended. Viewing from a distance was safer.

The culmination was the visit to the summit of the world famous “Sugar Loaf” mountain, for me the ultimate experience. From here helicopters start their unforgettable sightseeing flights, and you get the best views of the amazing landscape in which Rio de Janeiro is set.

Walking on the famous Copacabana and Leblon beaches and seeing the inland lagoon brought our wonderful stay inRio de Janeiroto an end. After eight days of new and beautiful experiences and making many new friends, on 8.3.2013 Oswin and I, after a flight of 17 hours, landed safely back in Vienna.