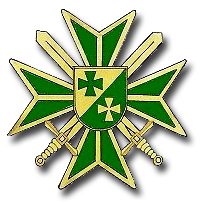 On March 16th 2017 the Governor of Lower Austria Dr. Erwin Pröll accepts officially the dignity of an Honourable Knight of the Lazarus Union in the rank of an „Honourable Grand Commander“.

Next to retired Federal Minister Dr. Werner Fasslabend and his wife Martina Fasslabend (decrees 1 and 2) Dr. Pröll became the Honorable Knight with decret number 3 and therefore he is regarded to be a „Founding Member“ of the Knighthood of Honour.

But at that time Dr. Pröll asked us „…not to hang this on the big bell as long as he would be the Governor…“. We respected his request and we never made any „publicity“ with it. Solely the fact that we could regard him as our brother and Honorable Knight made us happy.

But now Dr. Pröll retires after being the Governor for 25 years and so we were able to get officially the Knights‘promise from him in his office in the frame of a visit of the retired Federal Minister Dr. Werner Fasslabend, President Senator Prof. h.c. Wolfgang Steinhardt and Vice President Grand Prefect Ludwig Brunner. Afterwards we took him up publicly in our rows by handling out the decret (dated from 2011) and the insignias.

To the Governor the quote „a man – a word“ applies in the noblest sence. You can count on him!

As Dr. Pröll unfortunately cannot take part in our investiture ceremony on April 29th 2017 in Göttweig he has left over to us the following message:

We are grateful to him!