The academic senate of the “Academia Sao Lazaro de Estudos Cavaheirescos e Humanitários” in Rio de Janeiro in Brazil, as its only fifteen of “Academic Impact of the United Nations” recognized academies and universities in Brazil has awarded our President, Union Commander and Grand Master of the Knighthood of Honour , Senator h.c. Wolfgang Steinhardt, the honorary title

“Professor Honoris Causa”
of the Academy with the effective date of May 15, 2016th

The Academy honored with this award longstanding charitable activity of President Steinhardt and its commitment to science and research. Even the “Austrian Branch” of the Academy, the “International Leadership Academy – ILA” was launched at his initiative to meet future staff officers of the Lazarus Union to enable appropriate training.

Congratulations to this deserved award! 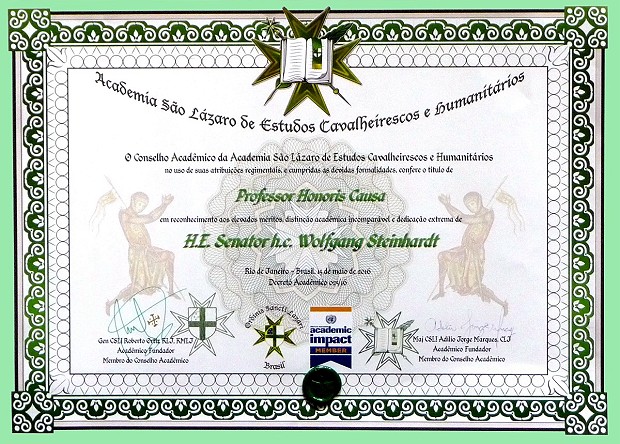 Investiture Brazil 2013 (from the Archive)