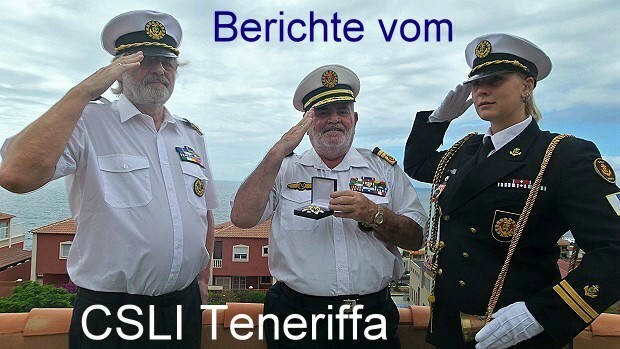 On June 6th, 2014, the Lazarus Union president awarded the new Grand Officer‘s Cross with Silver Star of the UN-NGO Remembrance Cross to CSLINC Cmdr. Anita König, and the Grand Cross with Golden Star to CSLINC Vice Admiral Prof.Hans König. Both were delighted of this surprise and expressed their thanks affectionately to the president of the Lazarus Union.

Bestowal of Awards in Tenerife

Presentation of the Commander‘s Grand Cross of the Lazarus Union and the UN-NGO Remembrance Cross to SenCmdr CSLINC Ferdinand Graf, and the Grand Cross of the Union‘s Lazarus Cross for science, research and arts to the commander Vice Admiral CSLI Prof.Hans König.

In return Prof. König received from his deputy on behalf of the chair of the Lazarus Union the Grand Cross of the Union‘s Lazarus Cross for science, research and arts nr. 001 in recognition of his cultural and literary merits.

To mark the occasion, Ferdinand Graf served his famous favourite dish “sea bass in salt mantle,“ which was greatly appreciated.