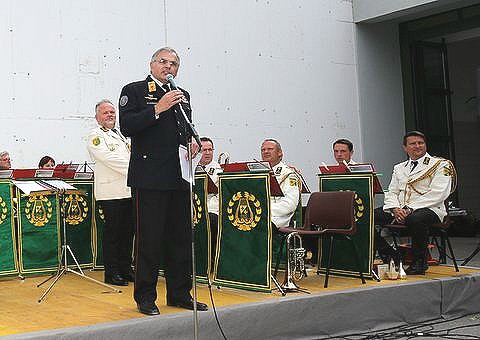 A report by „Spectator“,
pictures by Hannes Hochmuth (press photographer)

The Lazarus Union Music Corps’ second concert was held at 5 pm on the 22. June, 2014, in bright pleasantly warm summer weather. It was a community charity concert at the invitation of the Hagenbrunn Band with whom our Union Bandmaster, Bgdr Gen CSLI Fritz Lentner, has worked for many years.

Among the many great concerts that our Music Corps has played, it could be said that this concert was probably the best of all. The bands came very close to being a large symphonic wind orchestra and the selection and difficulty of the music, and its wonderful interpretation, inspired the audience of nearly 250 visitors.

The first part of this community concert, played brilliantly by our host band under their Bandmaster, Wolfgang Liebhart, helped establish a mood that became better and better. The variety of their musical programme spanned marches, operettas, classical pieces, modern compositions and a polka (“March of the Medici”, “A Night in Venice”, “Hungarian Dance No.6”, “Wings Of Freedom”, “The Cream Of Clapton” and “Alois Polka”). At the end of this section, the long-time Chairman and Mayor, Michael Oberschil, was appointed Honorary Chairman of the Hagenbrunn Band. Michael has belonged to the Band for well over 40 years, with over 30 years as its Chairman, and is still an active musician with his clarinet. He accepted this honour with obvious emotion and joy.

As a highlight before the break, the wind class of the Hagenbrunn School of Music played with enthusiasm, and to much audience applause, three pieces of music (“Doodle All Day”, “Mein Dreydl” and “Skip To My Lou”). Of course, the great applause demanded an encore! It cannot be stressed enough how important nurturing this young musical talent is for our bands and also for the preservation of our great musical traditions. With commendable foresight, themunicipalityofHagenbrunnfunds and encourages its own music school. Little wonder, as the Vice Mayor is also an avid musician in this Band!

At this point in the concert our Music Corps, directed by Fritz Lentner and his deputy, Franz Lentner, introduced itself by sounding the “Pappenheim Fanfare”. Our President, Wolfgang Steinhardt, acted as presenter and explained that the “Pappenheim March” which was to follow this fanfare was the ‘Corps March’ of the Lazarus Union and is played at each event.

And now came the first surprise: after conducting a few bars Franz was interrupted by Fritz and the Pappenheim March was ‘abandoned’. The reason? It was to surprise the President of the Lazarus Union. A new Lazarus Union March had been composed by Johann Hausl and secretly rehearsed by the Music Corps to be premiered at this concert. The march was dedicated to President Senator hc Wolfgang Steinhardt and, after this world premiere, the Music Corps presented him with the score. Visibly moved, he could hardly continue his presentation. The surprise had certainly succeeded!

The march itself can be described as really ‘snappy’ and beautifully musical to listen to. It contains the ‘main musical elements of the LazarusUnion’, the “Pappenheim March” and the “Kreuzritter Fanfare” as key themes in skilfully composed variations. This march is therefore now the OFFICIAL “Traditional March of the Lazarus Union”.

“What A Wonderful World“ (soloist Jan Kolaja) introduced the second surprise of the concert.

For the guests’ information, our President described the Lazarus Union’s goals and activities. He than presented Mayor Michael Oberschil with the Officer’s insignia of The Lazarus Cross for Science, Research and Arts as a visible commendation for his activities. The presentation of this VERY rarely awarded honour was followed by a prolonged ovation.

Maria Stoeckl was then awarded the President of the Lazarus Union Officer’s Cross of Honour (certificate No. 001) as a personal thank you from the President for all her activities ‘behind the scenes’ for the Music Corps.

A truly virtuoso music piece for trombone and tenor horn, “Für Meine Freunde” with orchestral accompaniment by Ernst Hutter, was a third amazing surprise for the audience. Played by Barbara Zisser (tenor horn) and Conductor Fritz Lentner (trombone), Fritz showed that he is not only a great conductor but also an extraordinary musician.

The melancholic “Unter die Haut Gehend”, written by Michael Wagner, and the “Volga Lied” from the operetta “Der Zarewitsch“ by Franz Lehar were sung, and then the very well-known melody “Exodus” from the Paul Newman film lead on to “A Symphonic Portrait”. This medley combines almost all the most famous compositions from Andrew Lloyd Webber’s productions (Cats, Phantom of the Opera, Jesus Christ Superstar, Evita, Joseph, etc.). In 1992 Andrew Lloyd Webber was knighted (with the title Sir) by Queen Elizabeth II and in 1997 made a Baron and Life Peer, thus becoming a member of the British House of Lords.

As a final song Johan Rabl sang “I Am From Austria” by Reinhard Fendrich  (the ‘unofficial national anthem ofAustria’) as a symbolic indication that the Lazarus Union is an Austrian organization that has also gained International recognition.

As the applause was long and hard, both Bands played together for two encores: the polka “Rosamunde” and the traditional march “O Du Mein Österreich“. Thus ended this comradely get-together and friendly afternoon of music. Big thanks go to The Hagenbrunn Volunteer Fire Department who hosted us with their facilities and infrastructure, and thanks also to the volunteers who served the excellent food and drink.

The net profits of this event will be divided equally to promote the music of theHagenbrunnJuniorMusicSchooland the work of the Lazarus Union. So this is also a big thank you to all donors!