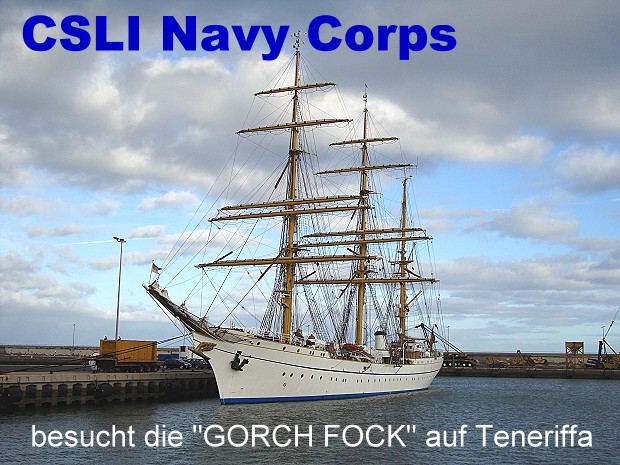 For many years the Canaries have served as winter quarters for the famous German Sail Training Ship ‘Gorch Fock’. After completing their training voyage in Gran Canaria, the cadets are flown home and the ship transfers to Tenerife. Here, in the port of Santa Cruz de Tenerife, a new crew of trainees takes possession.

Being such a regular visitor to our island’s capital was grounds enough for us to show our respect by visiting and presenting an embroidered pennant.

We were logged to arrive at 4.30pm, but fate wasn’t smiling kindly on us. With a time cushion of half an hour, we arrived in the vicinity of the pier and thought we were at our destination. But we had reckoned without the city marathon. Stern Motorcycle Policeman directed us away to the edge of the city, and all our attempts to reach the port in our cars failed. Thus began what felt like our own city marathon, though it was only five or six kilometres. It fulfilled the bold prophecy of our President, Wolfgang Steinhardt, that I “would soon be taking part in a marathon again” after my half-failed, half-successful hip surgery.

Finally, after climbing up the gangway of the ‘Gorch Fock’, we saluted the quarterdeck and the German Flag. We were very kindly welcomed by the Officer of the Watch, Lieutenant Sonneborn, who apologized for the absence of Captain Riesch who was taking his last shore leave, no matter – we would only have kept him waiting – so we presented our colourful pennant with the coat of arms of the Canary Islands. In return we received a souvenir crest of the ‘Gorch Fock’, but only after making a 20 € donation. Yes, even the German Navy must make economies. A tour of the upper deck of the barque completed our Sunday outing. Since, in the early 1980s, I had made some voyages on the big Norwegian barque ‘State Lehmkuhl’ (home port of Bergen), which was at that time in the port of Santa Cruz, and also on the three-masted full-rigged ship ‘Soerlandet’, I could contribute something from my memory on the amazing spider web of running and standing rigging above us. We looked up into the moulded steel mast spars: the mainmast, the topmast, and, we guessed, far above us at the very top, the topgallant mast. The mainsail and topsail shone white in the bright light with the lower shrouds leading to the mainmast top, and above them the topmast shrouds. Up these shrouds, with your feet clutching the cross-ropes, or ratlines, you have to go to reach the spars, which carry the sails. When working sails men were not harnessed, only standing on the footropes attached under the spars. It is perhaps not surprising that, since 1958, a number of sail trainees have been lost working the sails. Nevertheless, if one hesitates for a moment before beginning the climb, your shipmates will begin chiding you and the Officers will call, then roar, their orders. One just has to go out along the footrope bracing your body against the spar. We could clearly see the mainsail yard, the lower topsail and upper topgallant sail yards and, at the very top, the delicate royal yard which was always out of bounds to me with my weight.

From the right top centre of the topmast, behind the shrouds, backstays support the mast laterally, while from the front a stay prevents the mast falling. Our Corps Band horn player, Lt. CSLI Peggy Weise, had specially prepared for the visit on the Internet and, standing by the port side shrouds, it was a pleasure for me to compare with her the difference between details like the mainsail leech and the topsail leech. She had also learned by heart the story of the writer Gorch Fock, who fell at the Battle of Jutland in 1916 on the light cruiser SMS Wiesbaden, and after whom the Training Ship is named. His most popular work was a novel in which he described the life of the deep-sea fisherman. Its title ‘Seefahrt ist Not!’ (Seafaring is Necessary!) is often misinterpreted in Vienna as Seafaring is Distress!

Then we got to the quarterdeck, where I could relive my memories of the martyrdom of the capstan. These days there are motor winches to lift the anchor from the sea, but in my day capstan bars – long, rough, thick poles – were put into the capstan and we pushed them round in time to Sea Shanties with our minds empty, gasping for breath, until at last the command sounded “Up and down“. That meant that the anchor was dangling from its hawse and the ship swung free. The anchor then had to be lashed in place, taking care not to soil the ship’s plates, while the ship slowly got under way to begin its voyage.

Evening was coming on as the sun went down so we shot some photos of the figurehead of the Gorch Fock, a moulded carbon fibre albatross. In German the figurehead is known as a ‘Galionsfigur’, the term deriving from ‘galion’ the Spanish for balcony. The galion was a porch in front of the prow, which supported the bowsprit. At first figures were placed in the galion of Spanish and Portuguese ships, later they were attached to the outside. Although these later ship types had no real galion any more, the name Galionsfigur remained. Sailors’ superstition has it that the figurehead watches over the course of the ship to save it from disaster. The albatross of the Gorch Fock is its sixth attempt at a permanent figurehead, some being lost in storms, some severely damaged. At the end of our visit, the bay of Santa Cruz glowed in the sunset and my old memories, the memories of an “Ancient Mariner”, faded slowly with the fading daylight.