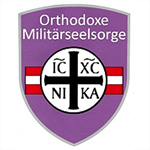 The Lazarus Union was very happy to receive an invitation from the Orthodox Military Chaplaincy of Austria’s Armed Forces to the Consecration of Water in Vienna’s Maria Theresa Barracks. On Wednesday 16 January, the delegation punctually met under the leadership of the Union Commander, Senator h.c. Wolfgang Steinhardt. He was accompanied by the Adjutant General, Christopher Ptak, the CSLI Ambassador toLithuania, Algis Klimaitis, and the Commander of the Honour Guard, Colonel-CSLI Patrick Poppel. Before the consecration he explained some of the background to the ceremony and the various customs of the Orthodox Church. The ceremony followed the Byzantine Rite, but was conducted in German. This allowed all participants to follow the procedings easily. Although the consecration was held in the open air, all those present could smell the fragrant incense. Only a very few were bothered by the bitter cold. Because of their great commitment to ecumenical dialogue, it was a great honour for the representatives of the Lazarus Union to participate in this ceremony. At the end, everyone was able to take a little of the consecrated water home with them. The celebration also demonstrated, once again, the important integrative values of the Austrian military.