We consider it important and explicitly worth mentioning that the investiture ceremony for the CSLI Knighthood of Honour is a continuation of the tradition of the knightly accolade. The mindset BEHIND this knightly accolade is MORE IMPORTANT than the ceremony itself. So there is neither any claim to authenticity whatsoever nor shall this be a “copy” of similar ceremonies from other organisations or associations. There will always be some similarities, this is in the nature of things, but there will always be different characteristics regarding our understanding for such ceremonies.

So for example we do not think it appropriate for candidates to kneel down in front of any “Grand Masters” or similar “dignitaries” as long as these do not belong to the clergy of any denomination. One kneels down only (according to our opinion) in front of God or his clergy and NOT in front of another human (like you and me).

Out of this view results the following CSLI Knighthood of Honour investiture proceeding. This ceremony shall be simple and brief but according to the dignity of this award and before all it shall neither hurt nor interfere with the personal sphere of the future CSLI Knight of Honour neither in religious nor in personal ways.

The candidate is called, and after his name has been spoken he takes position in front of the semi-circle. He remains standing for the duration of the WHOLE ceremony.

“Dear ……. (the candidate’s first name is used!), you have been considered worthy by the chapter of the CSLI Knighthood of Honour UNANIMOUSLY and in SECRET ballot to belong to our society as …. (Here the rank and the position is stated which the candidate is receives or gets promoted to). Step forward!”

The Grand Master asks the candidate if he wants to belong to the society of the CSLI Knighthood of Honour with the following words:

“So I ask you in front of the assembled society: Is it your free will that you want to be a member of our society as …….. (Here the rank and the position is stated which the candidate is receives or gets promoted to) and to accept our mission statement?”

The Grand Master asks the candidate:

“Are you aware what it means to be a member of this society?”

The Grand Master then says:

“Receive now the outward sign of your new dignity. Always remember the character of the eight virtues of a knight, and may you be given the power to act on them.”

Then the Grand Master takes the sword again, and with the following words (symbolically) knights the candidate, first on the right, then on the left shoulder, finally touching the crown of the candidate’s head:

“Through the power of the office entrusted to me you are, with this symbolic accolade, from this moment a member of our Knighthood of Honour, and I hereby bid you fraternally welcome to our circle.”

The Grand Master passes the sword back to the Sword bearer and gives the new Knight of Honour a triple kiss of brotherhood (right, left, right).

Should a clergyman be present, and the candidate so wishes, he steps in front of the clergyman, kneels down and prays for God’s blessing with these words:

“I ask God for His blessing, that He gives me the strength to prove myself equal to this high honour and dignity.”

After being blessed and being handed his Knighthood of Honour certificate, the new Knight takes his place in the semi-circle of Knights.

(This ceremony takes place for each candidate) When all the investitures are completed, the Grand Master says following prayer:

Because there is in giving, receiving.
Anyone who forgets himself, finds himself;
Anyone who forgives is forgiven;
And who dies, awakens to eternal life!

The order for the investiture ceremony is completed. 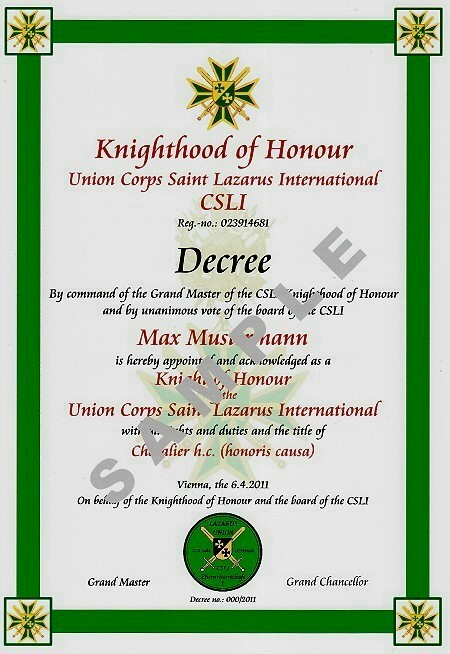 Admission ceremony into the Knighthood of Honour of the Lazarus Union