Captain/Master in Command of the MAERKS-Commercial fleet (redt.)
Hans-Rudolf Gries

Welcome to the website of the Navy Corps of the Lazarus Union.

International seafaring is an all-round part of the mankind history and is active in almost all countries of the world. Some landlocked countries do not have maritime shipping in the traditional sense but they maintain the naval tradition on their lakes and rivers.

Generally speaking, naval comradeship is therefore an international component of most countries and, for this reason, cannot be imagined without the Lazarus Union.

Therefore naval comradeships have been established in some Member States. Furthermore, countless members within our Lazarus Union are inspired by the maritime spirit and can be proud of seafaring education. This was also the reason for the founders of the Lazarus Union to approve their own internal naval uniform.

As Navy Corps Commander, it is a great honor for me to perform this function for our members. I am extremely pleased to provide you advice and assistance. Of course, in the future we will carry out some actions to bring the spirit of naval comradeship to life!

Unfortunately due to the Corona virus some of the planned projects, such as training courses and practical trips have not yet been implemented this year because personal meetings were not possible.

In the meantime, however, the head of the Navy Corps has thought to give the Navy Corps more external significance. One of the changes, therefore, is that promotions and appointments above a certain naval level are linked to the passage of the training modules of the Leadership Academy of the International Lazarus and a nautical training is required for higher management positions. These changes have already been implemented in the guidelines published on the homepage and are to be clarified below. By demanding nautical training, we can also make it clear to the outside world that ranks within the Navy Corps cannot be “waited out.”

Only in this way can we be credible to the outside world.

As a precautionary measure, however, we would like to point out that the current ranks remain.

Even if, as already mentioned above, no activities could take place this year, we would like to give an outlook of what we are planning for the future.

The future projects and plans of the CSLI Navy Corps are to deal with two things.

On the one hand, the Navy Corps , like all other groups of the Lazarus Union, will be present at the general events and will actively participate.

On the other hand, however, it is planned to organize maritime events and to give interested members the opportunity to train and also gain practical experience on the high seas. In cooperation with other associations and institutions, such annual programmes can be created and implemented.

The maritime idea is to be strengthened at appropriate events such as commemorations, spiritual events and on traditional days.

As a round-off for the extensive new program, comradeship evenings would be planned, at which the most important thing is probably maintained – the friendship.

Naval Command of the Lazarus Union

The command consists of several people who lead the operations of the Navy Corps International.

As head of the Lazarus Union, the General Plenipotentiary always keeps an eye on his naval department. Projects need his approval!

As Chief Officer he has the status of an Admiral CSLI.

As the name suggests, this is the function of a commanding officer. He holds all the threads concerning the naval matters from all countries and naval comradeships. The Corps Commander is responsible for future projects. He is also the information centre for necessary information. Interested people can contact the “Navy Corps Commander” in order to become a member.

The Navy Corps Commander is the number 2 in the hierarchy and has the status of a Vice Admiral CSLI.

This function represents the Naval Corps Commander in case of being prevented.

This function has the status of a Rear Admiral CSLI.

The Advisory Board in the Naval Command

Members of the Advisory boards are promoted to the status of Commodore CSLI. 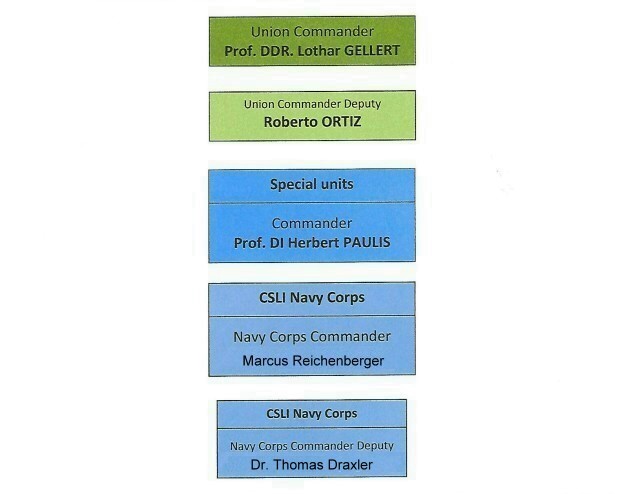