Those organization are „knightly associations“ at the best, whose members try more or less to accomplish the traditional knightly virtues and (try to) live in accordance with the organization’s Constitution, Statutes, Codex of Honors or whatever the name of the relevant document may be.

CSLI is far from commenting on or evaluating of those „modern knighthoods“, as it is not her task at all. Everyone, who acts in a knightly way – under whatever conditions and circumstances – deserves the full respect of CSLI.

On the contrary! The traditional virtues of the old knighthood haven’t lost anything from their importance today. All the attempt to accomplish those virtues and all the effort to move also others to accomplish them are nowadays even more important and necessary than anytime before.

CSLI, as a voluntary, humanitarian, charitable and world-wide organization, would like to promote those virtues (faith, hope, love, mercy, wisdom, justice, courage and temperance) whenever and wherever possible, and therefore (although not being an order of knighthood proper) it was decided to introduce the symbolical „Knighthood of Honour“.

The CSLI’s Knighthood of Honour is primarily intended for the officers of CSLI from the CSLI staff officers above. It could be also given also to the non-members of the CSLI and under the special circumstances as a reward for exceptional accomplishments also to the lower CSLI officer ranks. Women and men are equal.

The grades of the Knighthood of Honour are as such:

The petition has to be accompanied with substantiation and relevant documents. All the charitable and humanitarian activities of the petitioner should be documented, as well as the involvement at the Fire Fighters, Red Cross and similar organizations, in the elderly, disabled and homeless care facilities and the personal involvement in the furtherance of the universal peace and understanding between the nations.

Usually the grades of the Knighthood of Honour are awarded in the order mentioned above, but under the special circumstances – mainly by the non-members of the CSLI – the respect could be taken also to the social position, age and the reputation of the future CSLI Knight of Honour. But as a general rule the „skipping“ of grades should be avoided.

The award of the Knighthood of Honour is always accompanied with the extraordinary membership in the CSLI (without member fees).

Save the mentioned grades also the following honorary titles could be awarded, always with the specification „…of the CSLI Knighthood of Honour“:

Standard of the Knighthood of Honour 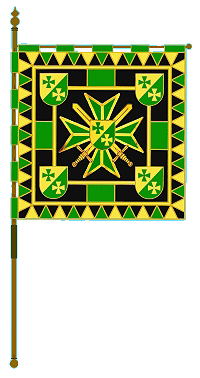 The TOTAL number of members of the Knighthood of Honour of the Lazarus Union has been increased by a new resolution of the chapter to:

NOTE: The number of Knight Expectants is unlimited!

(These steps are exclusively internal rules of the Lazarus Union and as such are not subject to external evaluation by third parties. Everybody who applies for membership as a Knight of Honour and is accepted into the society voluntarily accepts these rules.)

As written above, the award decides the Presidium of the CSLI after a careful discussion by voting by ballot. The result of this voting is binding and cannot be challenged. The voting can be repeated two times and the third voting should not take place on the same day. The award is approved only if the voting is UNANIMOUS. The chapter is appointed by the grand master.

After the voting, the result is communicated to the petitioner and if the result is positive the appropriate fee for the decoration is also communicated. This fee has to be paid only once. *) There are no other fees (like yearly membership). In a substantiated case the Presidium can decide about the award without this fee. In such a case the cost for the decoration lays at the CSLI. 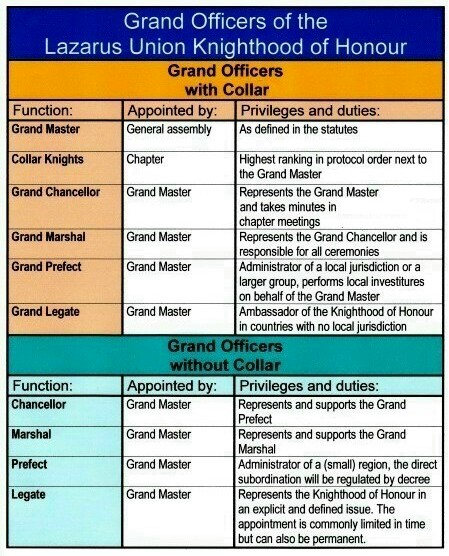