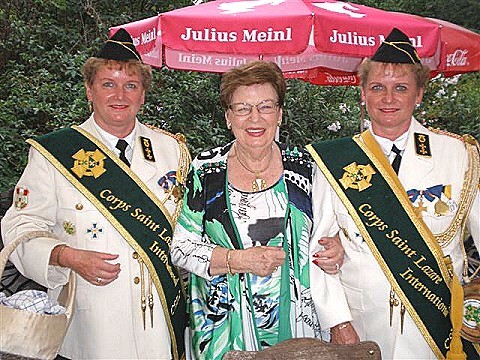 A report by Friedrich Lentner, translated by Mike Boxall

On 22 June 2013 a small formation of the Lazarus Union Music Corps played in an historic setting. The occasion was a gala dinner hosted by the Austrian delegation of The Order of the Slopes of Champange (Ordre des Coteaux de Champagne – www.ordredescoteaux.com ).

The Music Corps ensemble had been requested to play mainly Austrian traditional marches at a champagne reception in thegardenofThürnlhofCastle in the Simmering district of Vienna. This castle has the nickname “Napoleon’s Castle” because, in 1809, Napoleon used it as his headquarters during the Battle of Aspern. More information can be found on the Internet or, when visiting the castle, in the castle museum.

Guests of the Champagne Order, some of whom had come from as far away as theTyrol, responded enthusiastically to the musical performance, as did the owner and landlord of the Castle, Prof. Mag. Johann Hallwirth. He was well qualified to judge, since he is a Member of the Council of the University for Music and Performing Arts.

At the request of the host, the Marseillaise was also played. This was another successful appearance on behalf of the Lazarus Union.