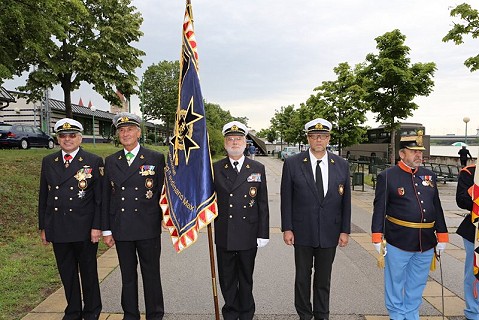 at the banks of the river Danube in the Viennese district Leopoldstadt, July 20. 2012

The “Österreichische Marineverband ÖMV” under the command of its president Colonel ret. Baurat h.c. Prof. DI Karl Skrivanek, with the support of the Military Command of Vienna of the Austria Armed Force and the “Marinekameradschaft Admiral Erzherzog Franz Ferdinand Wien im ÖMV ” have had organized this impressive Naval Memorial Day 2012. The naval comradeship „Vizeadmiral Erzherzog Ferdinand Max“ (Vice Admiral Archduke Ferdinand Max), embedded in the Austrian Naval Federation and in the LAZARUS UNION, participated in this ceremonial act with its flag and a strong delegation, led by Senator h.c. Wolfgang Steinhardt. Among the other participants: HE the Ambassador of the Croatian Republic Gordan Bakota, Military Commander of the region of Vienna Bgdr. Kurt Wagner, high ranking Officers of the Austrian Army, Mag. Markus Habsburg – Lothringen. Representatives of many foreign naval comradeships, and from the Austrian counties. Military attachés from Italy, represented by Col. Paolo Stendardo, from the Czech Republic, from Hungary, and from Bulgaria. Deutschmeister from Vienna, the “Riding Artillery Regiment No. 2” with a saluting gun and delegations from various traditional comradeship organisations. The musical framework was provided by the band of the Austrian Army Guard Corps. Flag parade, – in remembrance of fallen comrades a memorial wreath was entrusted the river Danube from aboard the patrol boat „Colonel Brecht.” The guests of honour endured the rainy weather with bravery, as a comfort the Deutschmeister provided fermented sunshine at a small stand to fight the humidity within! In the afternoon a partnership treaty was ceremoniously signed at the Italian Embassy between the Austrian Naval Federation and the “Gruppo di Trieste of the Associazione Marinai D´Italia.” More information can be found if you follow the link  www.marineverband.at  and check for “News”.