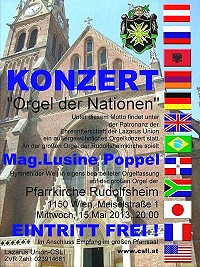 Under this title a remarkable organ concert to mark the 58th Anniversary of the signing of the Austrian State Treaty took place on 15 May 2013 in the Rudolfsheim parish church. The concert was held under the patronage of the Lazarus Union Knighthood of Honour.

On the Church’s great organ Mrs Lusine Poppel played national anthems of the world from a score specially edited for the organ. The concert was a landmark in the history of concert performances of the Austrian National Anthem. As mentioned above, the occasion was the commemoration of the signing of the State Treaty in 1955. Another motive was to provide an event that accorded all the nations of the world the same respect. So the concert aimed to make a small contribution to international understanding.

On the night, the great church at Kardinal Rauscher Platz resounded to the anthems of the signatory States of the Treaty and 12 national anthems from around the world. The national anthems were selected according to artistic merit, not political criteria.

The CSLI was especially delighted that so many guests were able to accept the invitation – there being three simultaneous Vienna District Festival 2013 events that evening. The Grand Master of the CSLI Knighthood of Honour, Senator h.c. Wolfgang Steinhardt, acted as presenter for the concert. Representatives of our allied organizations attended: The Radetzky Order, The Order of St. Michael and the Austria Humanitas Corps. We said welcome also to representatives from the diplomatic corps. Especially the Military Attaché of the Federal Republic of Germany, LtCol Joachim Timmel and his wife and our Knight of Honour, Chancellor Anton Marku from the Repbulic of Kosovo as well. After the entry of the Banners, the CSLI Fanfare and our march (the Pappenheimer Marsch) were played. The guests waited with some curiosity for the main program. How would The Marseillaise sound on the organ? The national anthem ofArmenia, played as a prelude, made an impressive introduction to The Marseillaise with trumpets and the powerful anthem of theRussian Federation.

All guests seemed visibly impressed to hear the well-known national anthems played on a church instrument.

After the Austrian National Anthem, the singing of the song “I Had a Comrade” was accompanied by the lowering of Banners in salute. A minute’s silence was held to remember all who lost their lives in war. Although the concert lasted less than an hour, we shouldn’t forget that the organist had invested several days in preparation for this unique project.

Every single anthem was rewritten from its orchestral score into a version playable on the organ. Thus the National Anthems of Armenia,France,Germany,Albania,Britain,Russia,South Africa,Brazil,Japan, The USA, The Dominican Republic andAustriawere heard. We are delighted to have Mrs Lusine Poppel as Music Officer in our ranks and look forward to more successful concerts.

Afterwards, a small reception in the parish hall offered an opportunity for an exchange of views. The traditional Viennese coffee house, Café Weingartner, provided rolls for the reception. They reflected the theme of the event, with their ingredients drawn from the national dishes of the 12 nations whose anthems we had heard. Wine was kindly provided by The Association of Friends of Rudolfsheimer Church. Truly, music knows no boundaries and we hope our concert was a small contribution to international understanding. Reactions were positive in all cases. We thank you for coming and look forward to the next concert. Lusine Poppel was born in 1979 in Yerevan (Armenia). She comes from an old Armenian academic family. Having completed studies in music and education, she now works as a music teacher and concert pianist. She has an expert knowledge of old keyboard instruments and the music of the 16th and 17th Centuries, and came to Vienna in 2009 to further her studies of church music.

In addition to her Doctoral studies and playing the organ at services in the Churches of Vienna, she has agreed to serve as CSLI Music Officer.

As an accomplished pianist and organist she is able to provide the music to accompany both spiritual events (Investitures, Masses, etc.), and social gatherings.