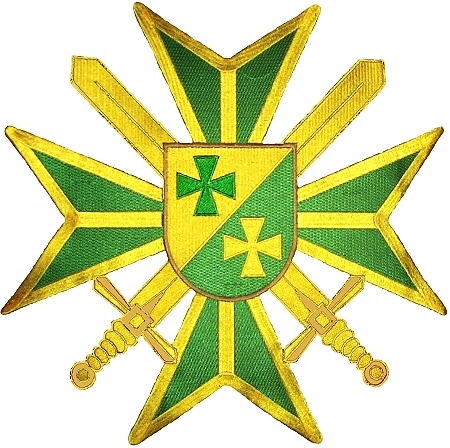 A report by Chev. Erich Kadlec +

The investiture ceremony, which was held for the 10. time, has almost become routine for many knights of honour. But this time it was a very special and dignified event for us and the many guests. The tremendous background scene of the inner bailey provided for a festive and ritualistic ambience, illuminated by more than 40 spotlights (with their own choreography).

Until the last minute we feared for the weather, which was even more important this time as today‘s event was considered the final test for next year when the LAZARUS UNION organises the  3.INTERNATIONAL HOSPITALLER SYMPOSIUM   Sept.  3. to 6. 2015. Planned are a symposium, a summer ball, and also a ceremonial investiture at Kreuzenstein Castle.

The event commenced in the early afternoon with a large framework programme. Among other events a castle tour was offered, which took the guests on an exciting trip through the centuries as well as a visit to the birds of prey Show.

Falconry is between 3000 and 4000 years old and was developed in the Asian steppes. Besides laying out traps like snares, hunting with birds of prey was the only chance to provide meat for food. Therefore falconry is the oldest hunting technique of the world and has been declared an immaterial cultural heritage by UNESCO.

A “knight’s banquet“ sustained our guests, yet it had to remain uncertain if medieval knights already had pretzels to go with their lentil stew.

The planned champagne reception was replaced by a wine tasting, organised by Fichtenbauer-Mold Winery from Langenlois.

The preparations for the ceremony commence. Guard of Honour commander CSLI LtCol Gregor Holubek organises for the colours to take their place at the inner bailey. A really impressive picture – 36 flags and banners provided for an impressive background view.

Our special thanks once again go to the “knights“ from Prima Nocte, Milites Sancti Imperii and Armani Domini. They acted as our standard bearers, with their historical clothing building a bridge to the beginning of the former Lazarus order.

The ceremonial marching in of the postulants and the knights of honour mark the start of the ceremony. The CSLI fanfare and a march are Sound.

Our experienced protocol officer, LtCol. ret. Rudolf Murth, leads through the evening, this time in CSLI uniform. CSLI 1.Lt. Andreas Menhart and his team take care of the sound and light effects.

Our president and Grand Master Senator h.c. Wolfgang Steinhardt welcomed the guests. As during many previous investiture ceremonies we were able to welcome representatives from various friend organisations, the Radetzky Order, the Order of St. Michael, the Radetzky Hussars, Spillern voluntary fire brigade, the comradeship organisations, the Hospitaller Order of Saint Lazarus of Jerusalem as well as many guests, friends and relatives of our postulants, and Knights of Honour and CSLI members.

The crusader‘s fanfare led over to the presentation of the banners. Every Knight of Honour is entitled to his own coat of arms and also to present this coat of arms on a banner at official Events.

The Grand Master after calling the name handed the banner over to the knight being honoured with the banner.

Parson Markus Ferenc from Leobendorf blessed the insignias, after giving an excuse for being late which amused the audience: “I am in Leobersdorf since five days only … I have seen the castle from afar, but could not find the correct road … Then I stood in front of the castle gates, listening to all the music, but the gates were closed.“

It is tradition in the course of all investitures that the Lazarus Union officer‘s promise is renewed by all officers present. “I promise on my honour …“ Chev. Wolfgang Leitner, member of the chapter and chair of the honorary council directed the ceremony.

This was followed by remembering all those comrades who had already been called to the Great Army and for all those who had died in the course of support missions. This remembrance is celebrated especially dignified and ceremonially as can be seen in the Video.

During his speech, the Grand Master especially addressed the Lazarus Union mission statement (our basics – tolerance, humbleness, mercy, and brotherly love), giving a short summary of the history of the organisation, having more than 17,000 members in over 75 countries worldwide on all continents. We also are especially proud having received “Special Consultative Status“ with the United Nations (ECOSOC), which goes far beyond our former roster status. Our delegates have already participated in several events in the Vienna International Centre and in New York.

Most guests also for the first time were able to listen to the “Lazarus Union March“, composed by Johannes Hausl who also directed the performance and afterwards presented the score to our president, to whom the march is also dedicated. With this act the LAZARUS UNION not only has its own march but in total three relevant pieces of music: the Pappenheim March, the crusader‘s fanfare, and the Lazarus Union March. As a thank you the composer was awarded the special grade of the Union‘s Lazarus Cross for science, research and arts, a distinction which will be awarded only one singe time!

The investiture of the new knights of honour provided for the climax of the ceremony. The protocol officer called all candidates by their name and the Grand Master asked the already famous questions: “I ask you therefore, before the assembled congregation: Do you of your own free will as … … .. (here the rank and position to which the candidate is to be commissioned is used) want to belong to our community and accept our mission?“ and “Are you aware what it means to be a member of this community?”

After answering with “I want it with all my heart!” and “Yes, I am!” the candidates receive the insignia of their new dignity: the sword from Grand Marshal Chev. Ewald Angetter, the mantle from Grand Knight and member of the board Col. ret. Adolf H. Neidhart, and the insignia of the LAZARUS UNION Knighthood of Honour from our Collane Knight Hans-Christian Count Wilczek.

After the symbolic accolade by Lazarus Union president and Grandmaster of the Knighthood of Honour, Senator h.c. Wolfgang Steinhardt, the new Knight of Honour is welcomed into the society with the triple kiss of brotherhood. After this the new Knight faces the audience while the Grand Master presents the new knight with the words:

“Dear attendees, friends, comrades: here is our new Knight of Honour, we applaud him.”

After the applause the CSLI Fanfare and the Colours honour the new knight. This ceremony is then conducted for every single knight and dame of honour as it is a very special ceremony and shall be remembered with pleasure.

As a final surprise Manuela Murth presented the “Fare Well Song“ in a wonderful and emotional performance. All guests remained seated afterwards, nobody wanted to leave after this incredible song!

Our big and cordial thanks to all comrades who participated in making this event possible!

Banners of the Knights of Honour