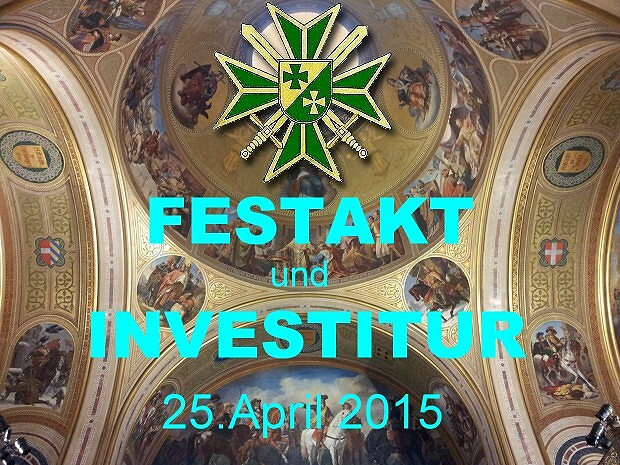 First anniversary celebration of the awarding of the “Special Consultative Status“ with the United Nations (ECOSOC) and first investiture of knight and dame expectants of the LAZARUS UNION Knighthood of Honour at the Army History Museum Vienna on 25.April 2015

A report by “Spectator“. Pictures by Hannes Hochmuth – Press Photographer

Speech of the President of the LU

Speech of the Grand Master

On April 25th, 2015, an exceptional ceremony was held in front of a large attendance. More than 30 flag delegations, more than 200 guests, Lazarus Union members, dames and knights of honour, and ten candidates for dame/knight expectant rank assembled in the beautiful and impressive hall of glory in the Army History Museum (HGM) in Vienna.

The two-hour long ceremony was meticulously planned and directed by our protocol officer, Lazarus Union delegate LtCol. retd. Rudolf Murth, supported by his vital assistant CSLI Mjr. Helene Kneidinger. A tribute and thank you to both of them before anything else!

The ceremony commenced with an open-air concert by the marching formation of our music corps in similar number of musicians to the future music bands of the Austrian Army Music Corps in front of the museum. The quality of the performance was rated “excellent“ by all guests. Also here a big thank you to all musicians and the bandmaster, CSLI Bgdr.Gen. Fritz Lentner. The LAZARUS UNION can indeed by proud to have such excellent public ambassadors.

Seating arrangements were planned in great detail this time so the ceremony (after an early “final group photograph“) could commence with the marching in of the colours, orders, postulants, dames and knights of honour, and the chapter into the great hall of glory exactly on time.

Our special thanks once again go to the “knights“ from “Prima Nocte” and “Armani Domini”. They acted once more as our standard bearers, with their historical clothing building a bridge to the beginning of the former Lazarus Order.

Following was the welcome address to our guests of honour (we were able to welcome the military attaché of the Republic of Germany Obstlt.i.GenStb. Heinz-Joachim Timmer and his charming wife) and many visiting delegations of the Austrian comradeship organisation, led by vice president Mag. Wolfgang Heuer. Also we were able to welcome representatives of the Military and Hospitaller Order of Saint Lazarus of Jerusalem, the Order of St. Michael, the Saint Joachim Order, the Black Cross, the Radetzky Hussars, the Austrian Life Saving Organisation, the French Black Cross, the National Comradeship Feldmarschall Radetzky, the Austria Humanitas Korps, the Naval Comradeship Vizeadmiral Erzherzog Ferdinand Max, UN NGO representatives, the Austrian Homecomer Union, and many friends and relatives of our postulants.

Following was the commemoration of the dead.

With a drum roll a burning candle, a picture, and the knight‘s coat of our former secretary general Chevalier Erich Josef Kadlec who suddenly passed away last year were carried into the hall by three dames of honour. Opera singer Wolfgang Schmalenberg affectingly sang “Closer my God to thee“ and in remembrance of all ceased comrades “Once I had a comrade“ was played. 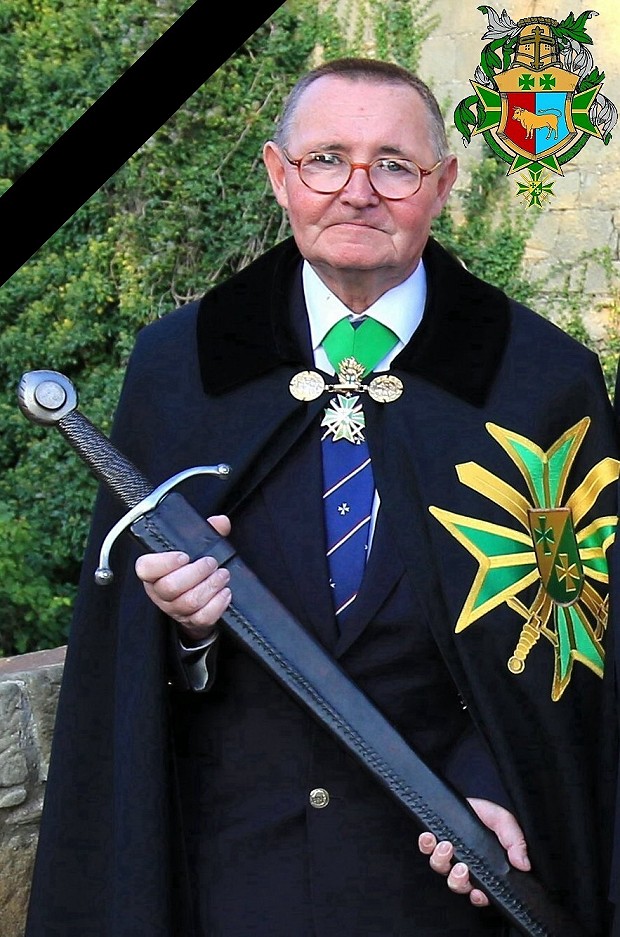 To be sure there was nobody among the guests of honour who had not to fight their tears.

The ceremonial address given by the LAZARUS UNION president, Senator h.c. Wolfgang Steinhardt can be viewed fully HERE. A greeting address from our founding member and highest ranking collar knight of honour, the former minister of defence Dr. Werner Fasslabend, was read as he was not able to attend the ceremony.

Next on the agenda was the presenting of awards to earned members and other persons who served the Lazarus Union well. It was a great joy that many of those were really surprised to receive an Award.

Awards were presented to:

Leopold Volnhals the Commander‘s Cross of the Lazarus Union Cross.

Ernest Jamy the Officer‘s Cross of the CSLI Cross of Honour.

Brigitte Brunner the Commander‘s Cross of the CSLI Cross of Honour.

Armin Blutsch the Grand Cross of the CSLI Cross of Honour.

Sascha Valenta the Grand Cross of the CSLI Cross of Honour.

Congratulations to all from the LAZARUS UNION!

The next ceremonial climax was the presentation of the new Lazarus Union Corps Banner by the “banner mother“ Brigitte Brunner to the LAZARUS UNION president. He took it with the words “…for the LAZARUS UNION I take this banner. I hold on to it and take care that nobody deserts it…“

After playing the “Lazarus Union March“ a banner of honour was given to Ambassador Chevalier Ludwig Brunner. “Banner officer“ was his seven year old grandson who managed this task excellently and in a cool manner. Finally all banners present received a LAZARUS UNION friendship banner pendant.

In between the various agenda items our music corps played. The whole ceremony took about two hours half of which were filled with Music.

The protocol officer requested every one of them to step up with the words: “Dear……..! Your mentor has proposed to accept you into our Knighthood of Honour in the rank of a “Knight Expectant“ (Dame Expectant) and the chapter has accepted this proposal! Step up!“ 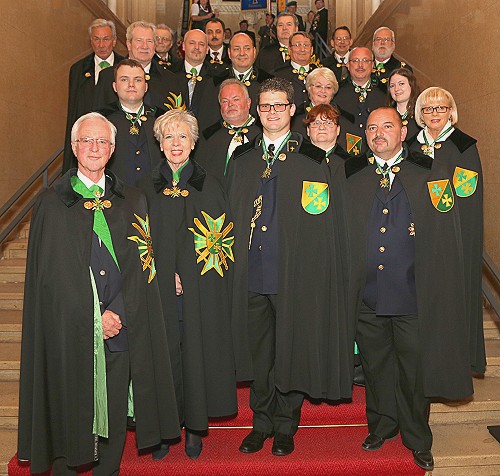 Then the postulants were separately led by their mentor in front of the Dames and Knights of Honour present.

With the plain question from the Grand Master: “I ask you in front of the assembled Dames and Knights of Honour: is it your free will to aspire the LAZARUS UNION Knighthood of Honour?“ and the postulant‘s answer: “By my honour, so is it!“ the following postulants were accepted by the Grand Master (in their first name‘s alphabetic order)

with the words: “So receive the formal signs of your new position: The plain coat and the cross. May you prove yourself worthy during your candidature to be then finally accepted into our Knighthood of Honour. Be welcome!“.

Every single new Dame and Knight Expectant was honoured with the “knight‘s fanfare“ and the applause from the audience.

After the renewal of the officer‘s promise by all LAZARUS UNION officers present the ceremony was finished gracefully by playing the Austrian national Anthem.

The guests were finally honoured by a marching out parade of the colours, the various veterans organisations, the Knighthood of Honour, and the chapter, accompanied by the Radetzky march, the Prinz Eugen march and the Lazarus Union march.

Finally the evening was finished off with smalltalk, long desired cold drinks and good food in the ARSENALSTUBEN, ending shortly before midnight. 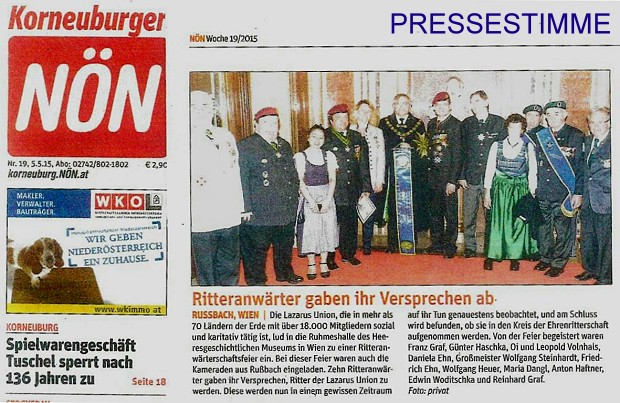