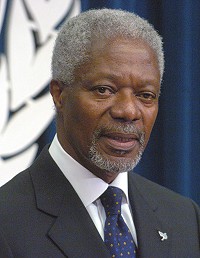 The President of the National Council, Barbara Prammer M.A., and the Austrian Society for Foreign Policy and the United Nations had been invited  to the former House of Representatives Chamber of the Parliament building for the lecture. Also present was the Federal President, Dr. Heinz Fischer, and high-ranking representatives from politics and diplomacy. It was an impressive experience to be in the historic session hall of the former Imperial Council: Whose seat was that? What had gone on here? Where had former deputies thrown inkwells at their political opponents? In addition, he called for a reform of the UN Security Council: that, for example, not a single African country orIndiais permanently represented on the Security Council can have no justification.

He went on to address the current situation in theUkraine: a situation which he said could become “much more serious”. His statement was unfortunately confirmed only a few hours later. The Auditorium responded to his speech with appreciative applause. Then, with obvious pleasure, he answered many questions from the audience.