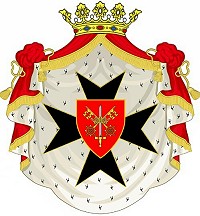 The Grandmaster of the German Knightly Order of St. Peter and Paul, Professor Dr. Lothar Gellert, and his wife Christina wearing their richly ornamented mantles when visiting the „Schule in der Widum“ on Friday in order to hand out a therapy bike.

The bike „Fun2Go“ is a so called Duo bike, a tandem with three wheels where the drivers can sit side by side. One person steers, both can pedal and the additional electric motor supports the pedelling. So it is more easier for handicapped children to use the bike. Deputy Head Ludger Große Vogelsang was emphasized: „Even pupils who are not able to move under their own power, have the possibility to experience wind blast und mobility.“ Additionally the place of the front passenger has a platform for placing the feet.

Ludger Große Vogelsang pointed out the importance of „freedom“ – not to be pushed. Also the fact that both seats are arranged side by side promotes communication and strengthens self-confidence. „This is much better than sitting in a trailer or on a tandem“, the teacher underlined.

The therapy bike – it costs about 4000 Euro – was donated by the members of the German Knightly Order of St. Peter and Paul and by members of friendly orders. „We were immediately confinced of this project“, Lothar Gellert said. The „Schule in der Widum“ introduced this idea at the investiture of the Order in 2019 in Lengerich. During this investiture there were considerable donation pledges. One single person spontaneously promised a donation of 2500 Euro and the remaining sum was also given during a short time.

„Praesis ut prosis, non ut imperes“ – live to serve, not to rule“, that is the idea of the Order of St. Peter and Paul. The charitable element is a central element among the knightly virtues as the Grandmaster pointed out: „To help other people, to collect money during the investitures, to support charitable projects, these are the real principles of being a knight“.

In 2018 the Order became independent of the Confraternity of the Knights of St. Peter and St. Paul. At present the Order has 45 members allover the world but the headquarter is in Lengerich.

After having tried the bike the kids asked Lothar Gellert: „Where is your sword?“ „Do you live in a castle?“ „Do you have a horse?“ After he answered these questions to the childrens‘ satisfaction he and his wife were catered with coffee and cakes. During these cosy talks the guests already encouraged the Deputy Head to think about new projects and to present them at the next investiture in August 2020. 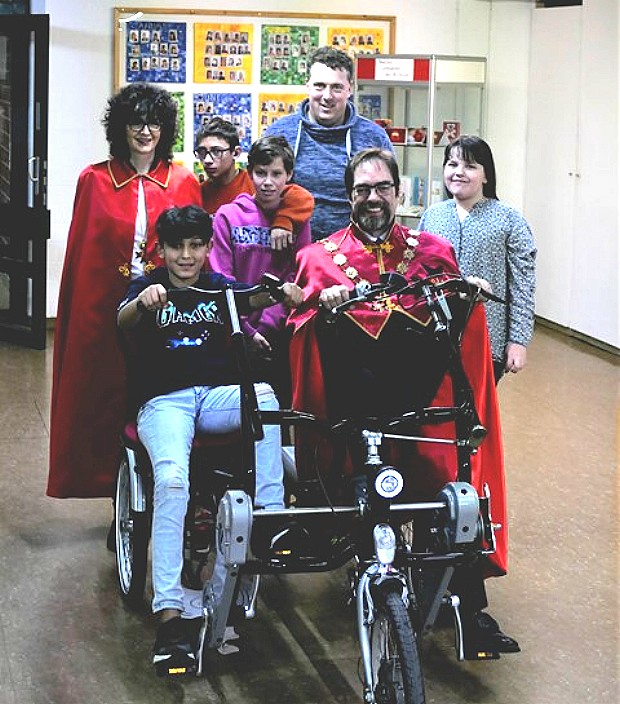