Greatest donation for the region

Bernd Höhle and King Céphas Bansah have known each other from the beginning of 2000. Since that time he supports aid projects in his kingdom.

The martial artist from Stadthagen Bernd Höhle in his function as ambassador for the Child Welfare Organisation and Dr. Dieter Kindermann visited Ghana. On their own experience they were able to determine the real need for surviving of the people in Ghana. The Child Welfare Organisation Inter-NATIONAL CHILDREN Help (ICH e.V.) supported them with different actions and relief supplies – inter alia deliveries of fully equipped ambulances and school buses, with financing schools (among others a vocational school where annually 60 girls are trained as sewers) and a brigde for passenger transport. Furthermore the organisation supported the schools equipment with running water, toilets, solar systems for generating electricity and much more.

The current action emphasized on the equipmemt of a hospital. For this action the German town named Stadthagen collected material donations throughout Germany for many months. The company Mann & Schröder GmbH situated in Siegelbach donated i.e. 25.000 bottles of baby care products. The donation also included diagnostic ultrasound equipment as well as material for operating rooms. The biggest item was however 60 complete equipments with modern nursing beds for the patient’s rooms. The team of ICH e.V. was active day and night. The volunteers collected the goods which were temporarily stored in Stadthagen. They were cleaned, repaired and packed – afterwards 5 container could start their journey. The action was possible by the help of many volunteers: the team of ICH under the leadership of Dipl.-Ing. Karl-Werner Coith, Bernd Höhle, THW Stadthagen, Mario Winkelmann, FrightGuys.

Even the president paid great attention to the delivery valued at approx. 500.000 Euro. During a radio programme he extraordinary paid tribute to the commitment of Stadthagen.

Besides all donations in kind money for the transport was necessary. Ernst Knapp from Wüstenrot helped notably by a generous donation. From his donation of 100,000 Eur the freight costs from Hamburg to Tema (Ghana) were also financed, which amounted to a staggering 31.000 Euro.

In Tema the containers were unloaded and then had to travel again with trucks in to Bolgatana – an almost 30 hour-journey. Bolgatanga is the capital city of the Upper East Region in Ghana and is situated near the crisis area Burkina Faso (the Federral Foreign Office has expressly warned not to travel directly to Burkina Faso).

In Bolga (as it is called in Ghana) Matthew Laws (a physicist and Dipl.-Ing. from Lübeck) and Dr. med. Rainer Hoffmann (a former chief physician from Rothenburg odT) checked the delivered goods for proper function for weeks, they installed them and instructed the physicians and nurses. These two persons were dispatched from Germany from the Senior Experten Service (SES). They also work voluntarily. Gerhard Lauth, ambassador of ICH. e.V. and former Mayor of Mosbach is well connected with SES. He also travelled to Ghana two weeks in advance to organise take the necessary steps.

In approx. 6 months the SES team and GerhadLauth will be on site for a follow-up training. werden in ca. 6 Monaten wieder vor Ort zur Nachschulung sein. „Help that reaches the people because we control it“, that is the principle of ICH e.V.

Indeed it was a great festival. The inauguration or official handover took place on 14th f March with the hosts and many high-ranking guests. Among the hosts were Prof. Ephraim Nsoh Avea from the der partner organisation TEERE, Paramount Chief Naba Baba SalifuLeyaarum (the highest-ranking king of the region) and die Regional Minister Paulina Patience Abayage (her position is comparable with a Prime Minister in Germany).

Among the members of the delegation were the ambassadors of ICH e.V. Bernd Höhle and Lutz Bierwirth (he was responsible for photo and film recordings), Joachim Scholtz, an expert in pension legislation from Berlin and naturally the President of ICH e.V. Dieter F. Kindermann. It was a challenge for the delegation because of a day temperature of up to 46 degrees and a night temperature of 35 degrees. But they meet the challenge although one member needed healthcare because of the heat.

The President Kindermann announces: „The help for Ghana will be continued. There is a great need, the poverty is incredible. The people are absolutely Die Hilfe für Ghana wird fortgeführt. Der Bedarf ist groß, die Armut unbeschreiblich. Die Menschen sind absolut amicable and very friendly. Currently the building of a farm with guinea hens is planned – helping people to help themselves”. 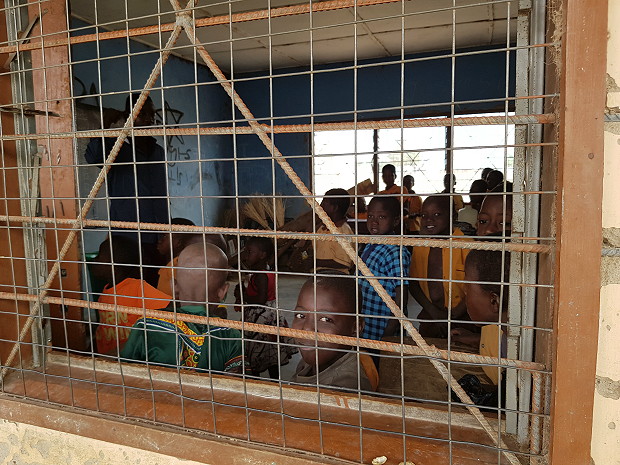 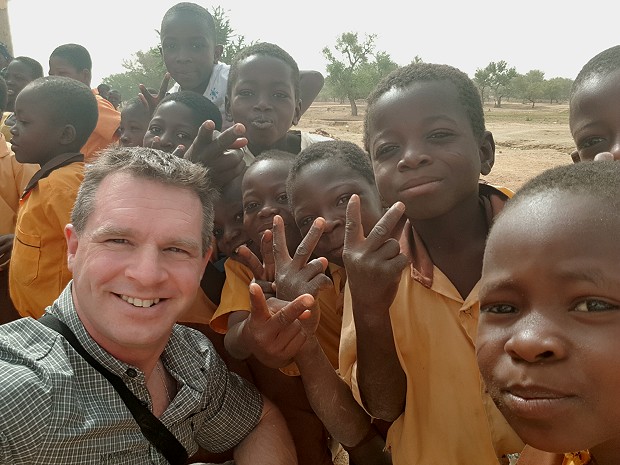 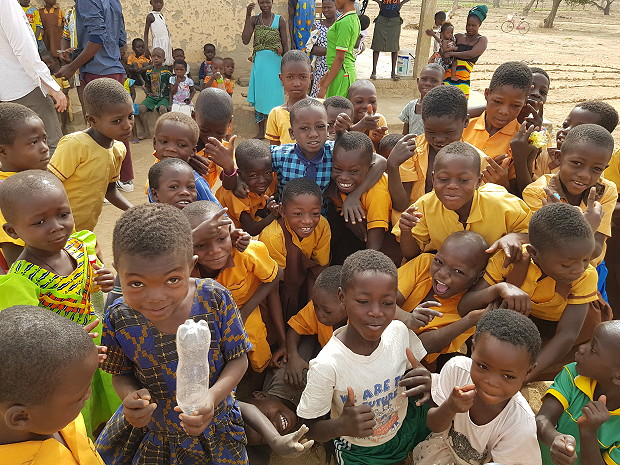 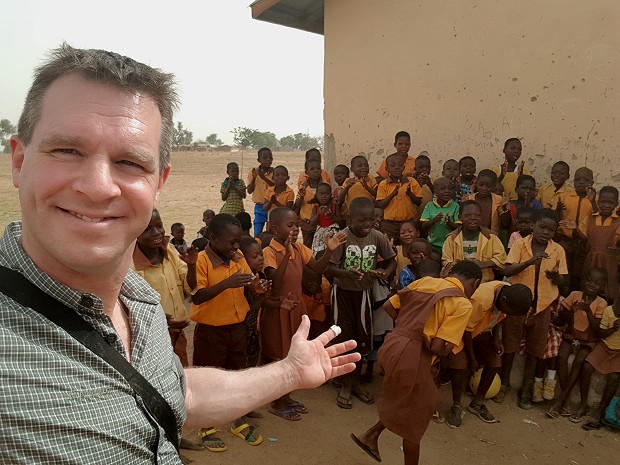 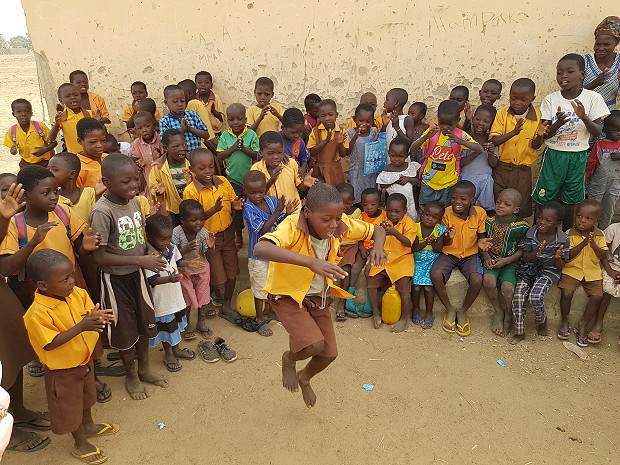 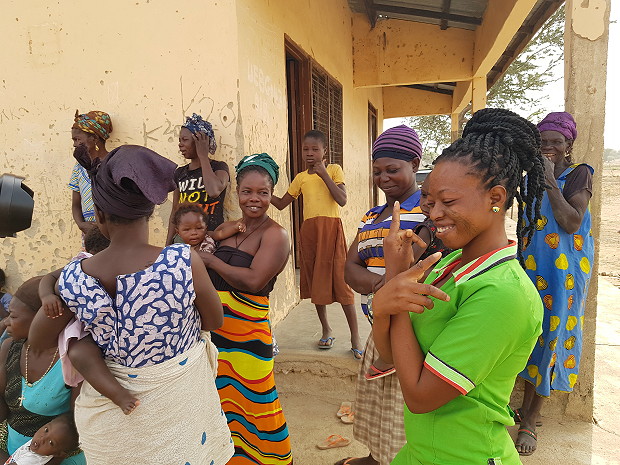 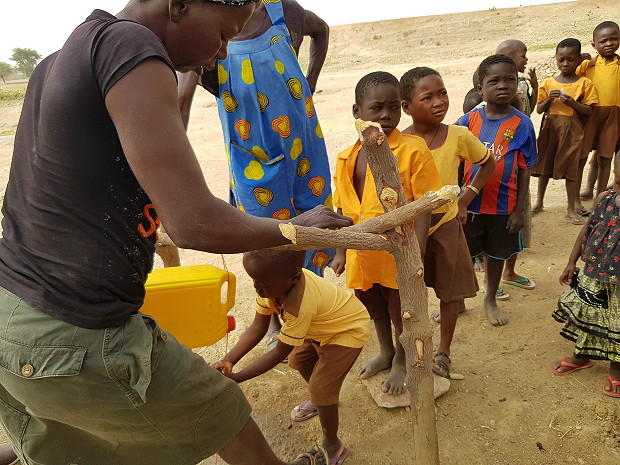 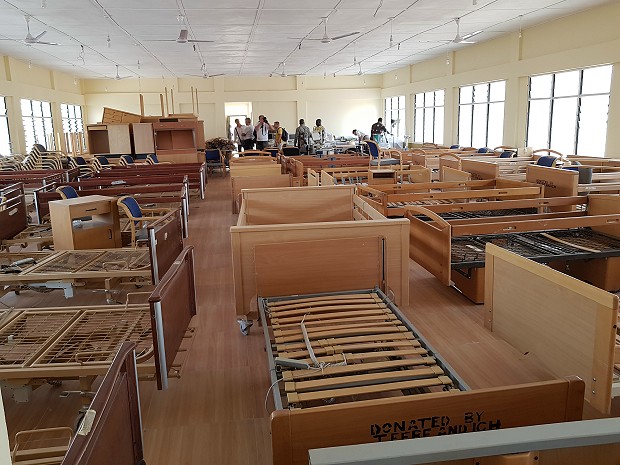 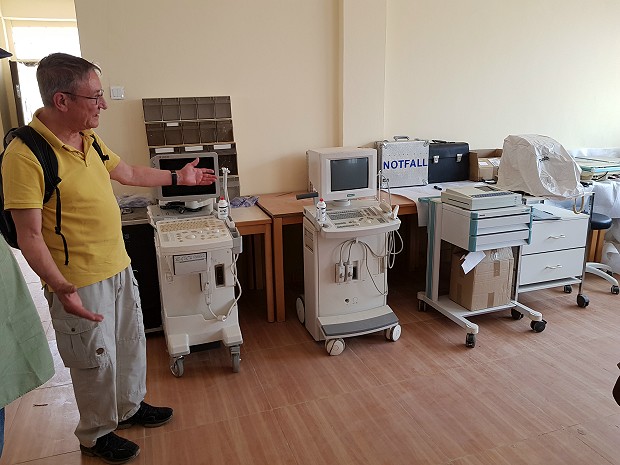 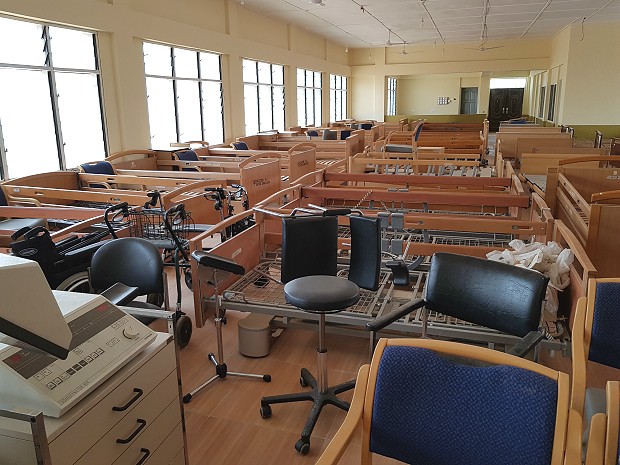 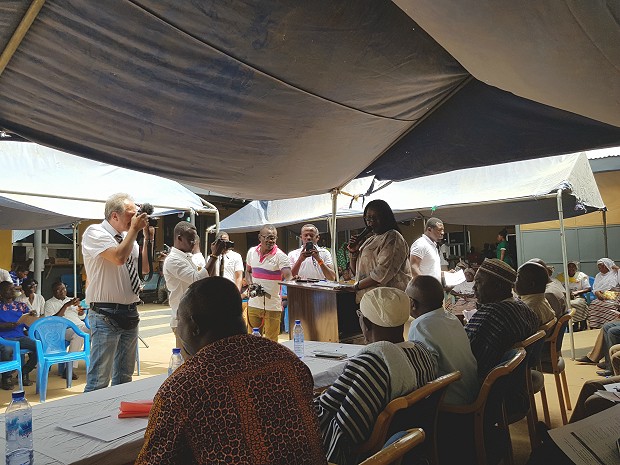 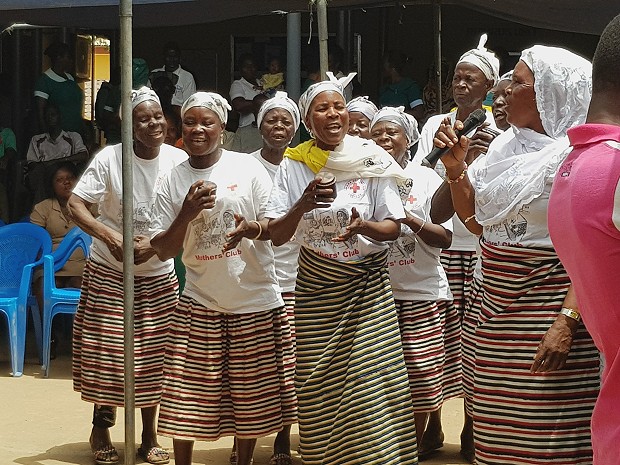 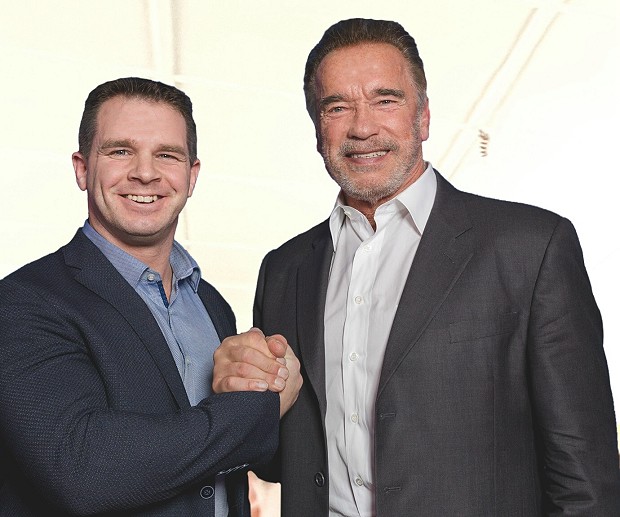 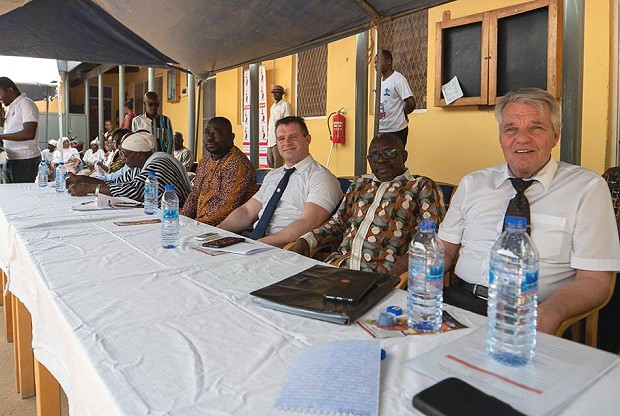 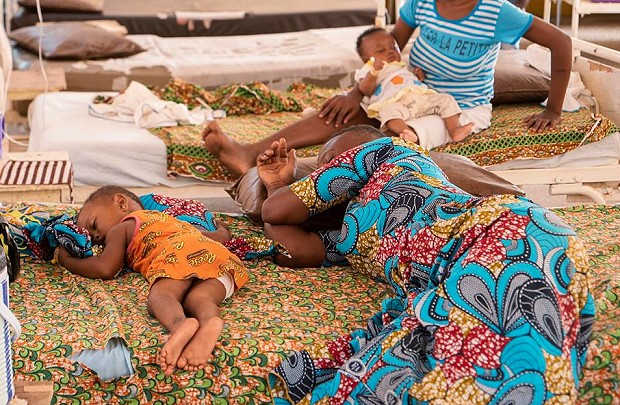 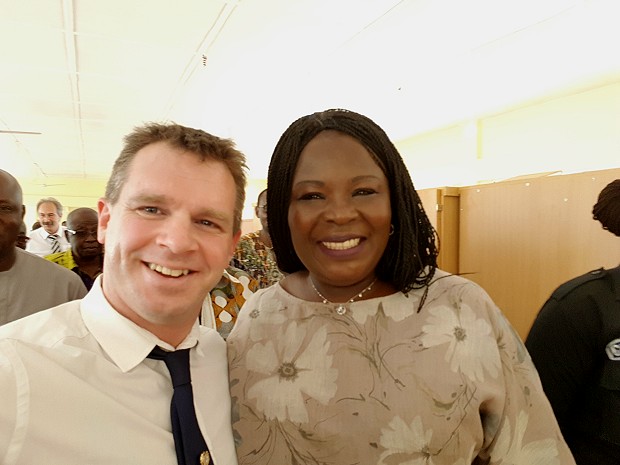 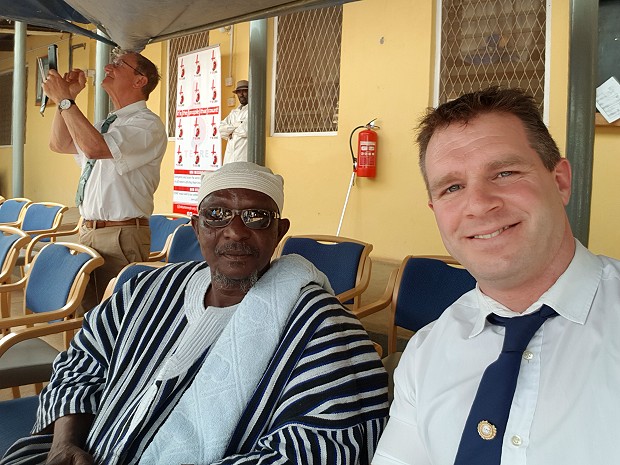 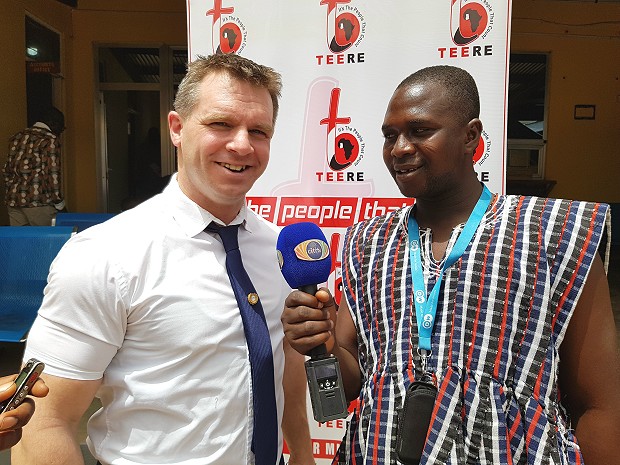