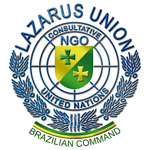 by Roberto Ortiz, Vice President of the LAZARUS UNION and Deputy Union CiC

On the September 12, 2015, the Brazilian Command of CSLI – Lazarus Union International received an extraordinary invitation from the Civil Defense and Protection of France, and had the honor to participate in the ceremony of “Rekindling” of the flame in the Arc de Triomphe in Paris.

Despite the deluge over Paris on the day, we did not discourage ourselves and we participate at the parade and at the ceremonial in a position of honor, placing a wreath next to the tomb of the Unknown Soldier.

On the same day, the ceremony was attended by members of the Fire Brigade of Paris, the Souvenir Français, the Ambassador to Belarus, Russia’s Ambassador and the Commander of the 113th fighter aviation group of France. Despite the rain, the musical ambiance was provided by the band of the Peace Guardians of France.

With the soul washed, and everything else absolutely soaked, the Lazarus Union was very well represented.

This event is a great landmark, and it proves the seriousness of our actions, the commitment to the next and the recognition of our efforts in an international level.