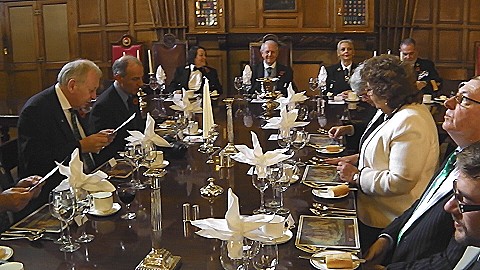 Lazarus Union is connected  with the Order of St. Joachim in a longstanding friendship and alliance. The order of St. Joachim is also a member of the Lazarus Union and many high officers and Knights of the Lazarus Union are also in this order, and vice versa many of the friars hold high command posts in the Lazarus Union. Even the eminent British naval hero of the battle of Trafalgar, Admiral Lord Horatio Nelson was a Grand Cross Knight and Commander of the Order. The Order of Saint Joachim was founded in 1755 by the Elector of Saxony and King ofPolandfrom the House of Wettin (=Windsor) and Battenberg (=Mountbatten). The members of the Order of St. Joachim by the year 1830 (reform of the House of Lords) had even seat and vote in that body. (This is historically proven). As our president and Union commander  since 2009, is Grand Cross Knight and Commander of the German-Austrian Commend “Leopold II” of the Order ofSt.Joachim, the participation in the investiture of the Order is not only a matter of course, but always a very nice experience for all participants.