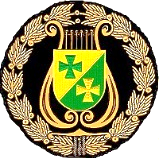 Birthday of the Emperor 2020

As in the previous year the Music Corps of the Lazarus Union was allowed to arrange the music program for this traditional many years’ celebration. Due to the corona pandemic this was the first performance of our Music Corps for over six months.

Gerhard Grund, the owner of the excellent restaurant “Kaiserziegel” in Kaltenleutgeben near Vienna and organizer of this event was responsible for it. As usual he has made a substantial investment and in the early morning he went to the make-up artist who styled him faithfully as our Emperor Franz Josef whose 190th birthday we celebrate in 2020. 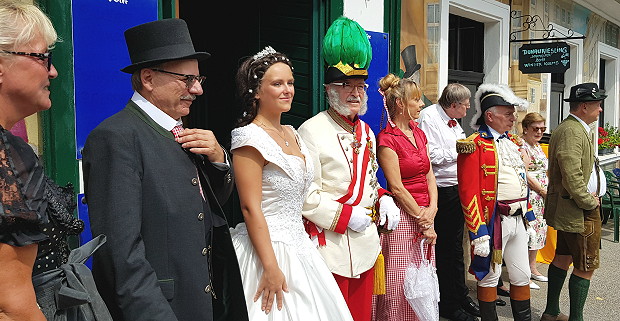 Before noon the Music Corps of the Lazarus Union and the “Hoch- und Deutschmeister 1809” from Perchtoldsdorf lined up in front of the restaurant “Kaiserziegel” in order to welcome the Emperor. Some traditional marches were performed to tune the large audience which was present in spite of COVID-19. 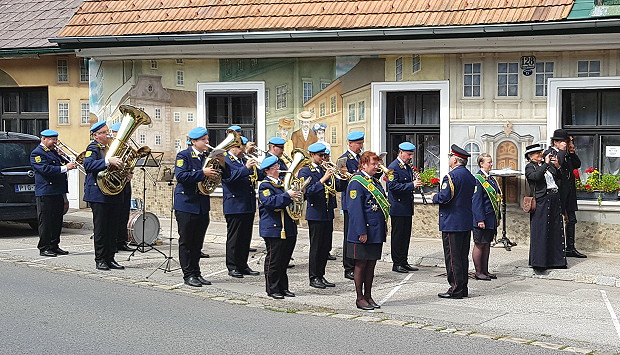 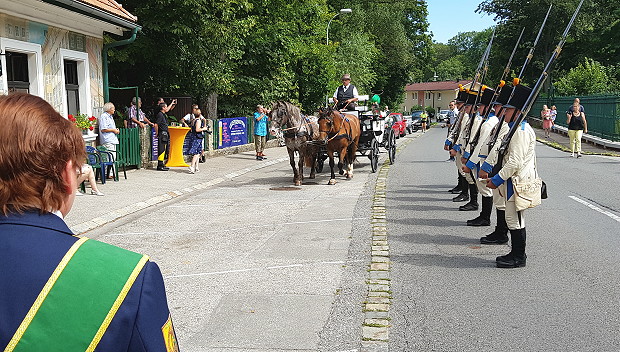 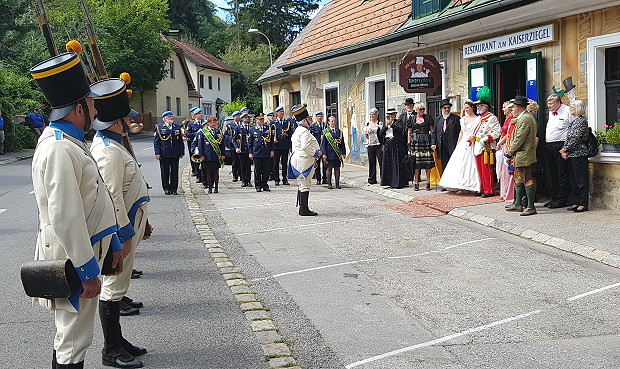 When the “Emperor“ and „Sisi” were in sight in their carriage the march “O du mein Österreich” was traditionally played. According to the protocol „Schützenmajor“ Bauer announced the present associations and asked for giving the salute: Three salutes were shot off. Afterwards the Music Corps played the imperial hymn. 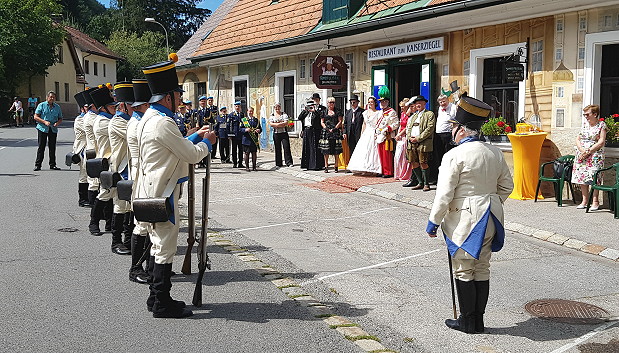 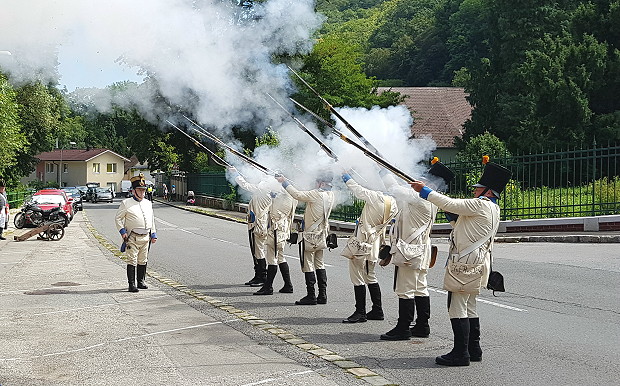 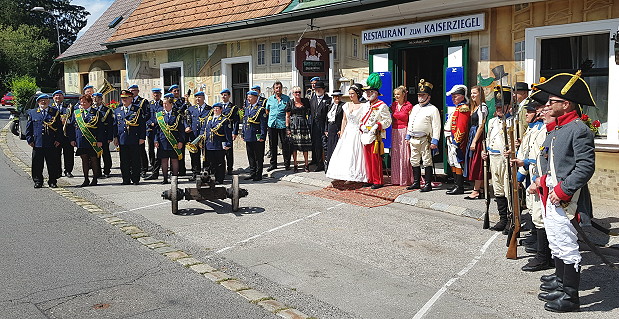 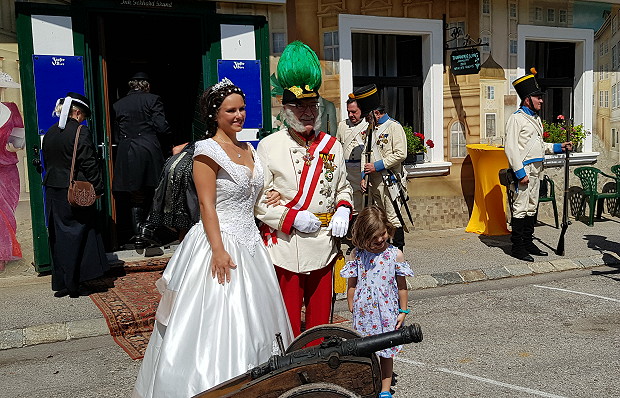 For the first time our new “Oberkrainer Quintet of the Music Corps of the Lazarus Union” appeared”. This is worth mentioning because a musician (Edith Lentner) only started to learn an instrument (Styrian harmonica) almost two years ago and after such a short time she was able to acquire considerable skill (thanks to her teacher Stefan Bergauer). 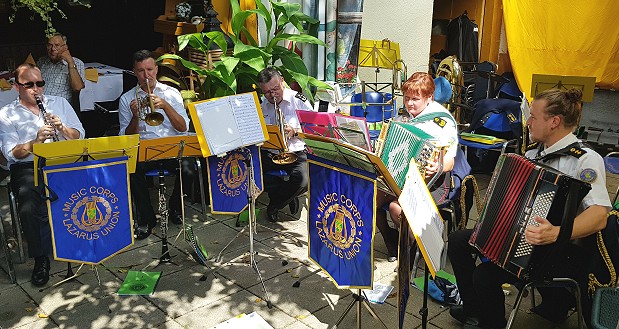 Due to COVID-19, unfortunately only half as many guests as normal could sit in the convenient beer-garden to enjoy the concert. Our founder, Senator Prof. h.c. Wolfgang Steinhardt PhD h.c. and his wife Vera also came and celebrated their 50th wedding anniversary with us. . 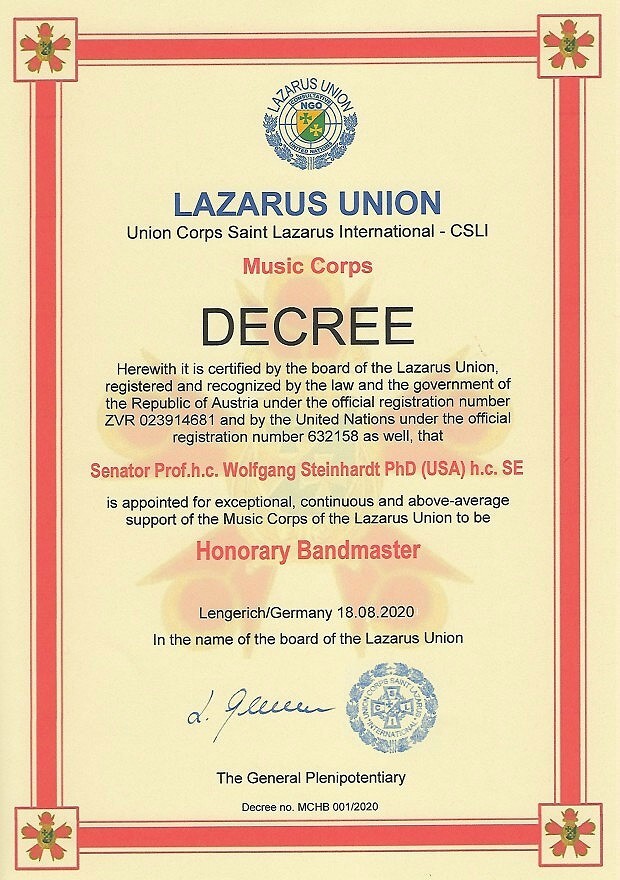 With a serenade, a beautiful bouquet of flowers and a gold-plated conductor’s baton (Senator Steinhardt was named “Honorary Bandmaster” by the Music Corps), this anniversary was celebrated with great applause. 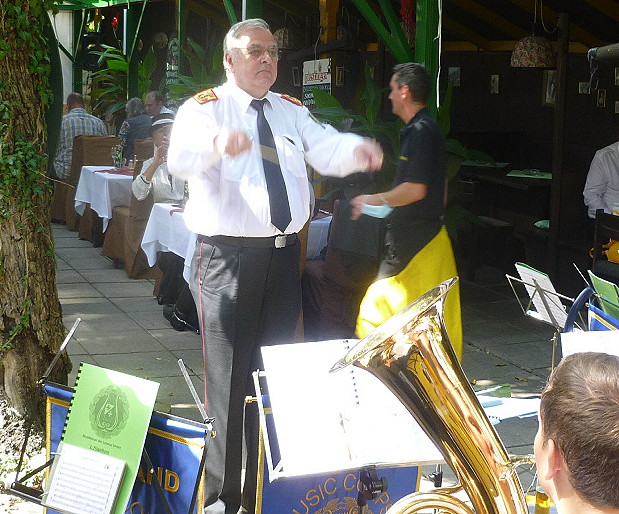 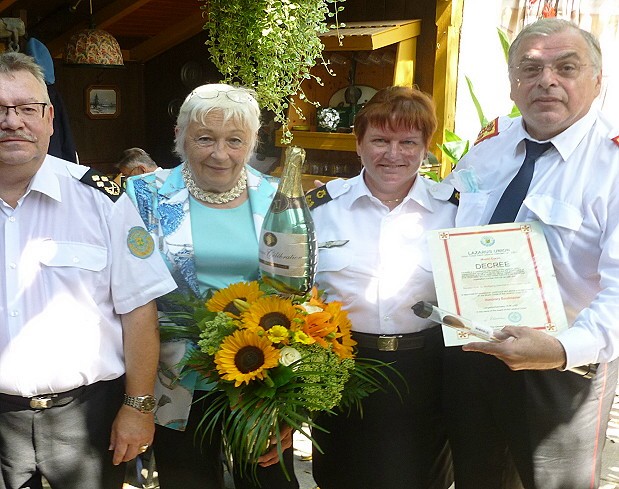 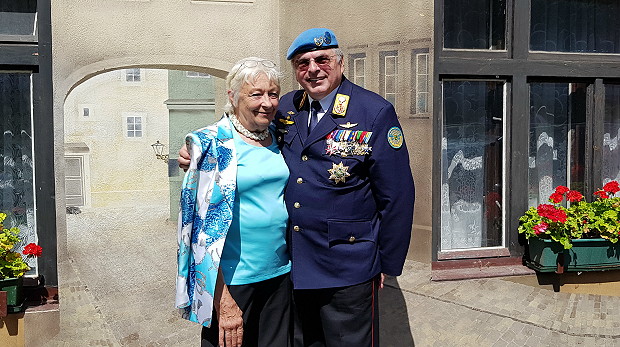 On behalf of the General Plenipotentiary Professor Dr. Lothar Gellert Senator Steinhardt handed out high awards of the Lazarus Union to Barbara Zisser, Friedrich Lentner and Stefan Bergauer for their merits for the Music Corps. 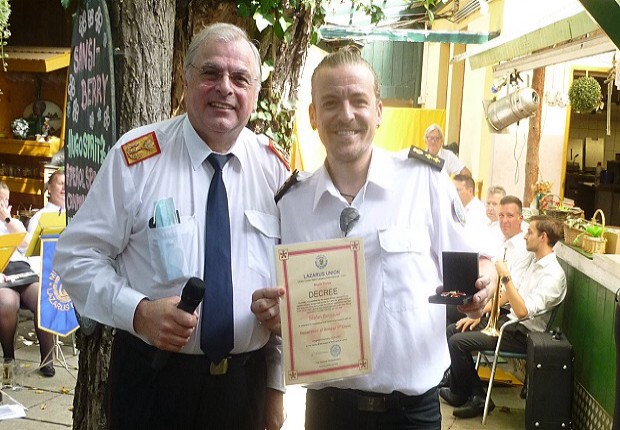 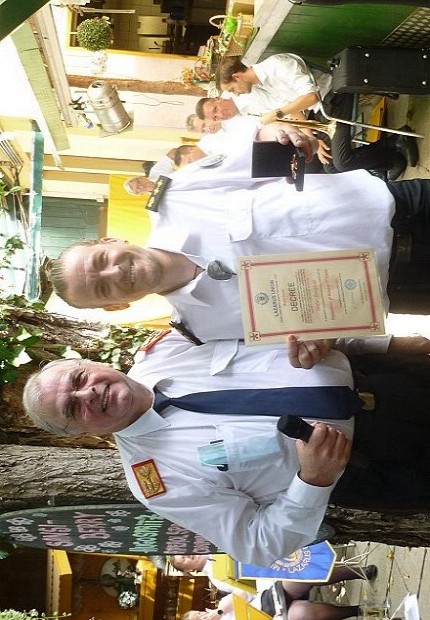 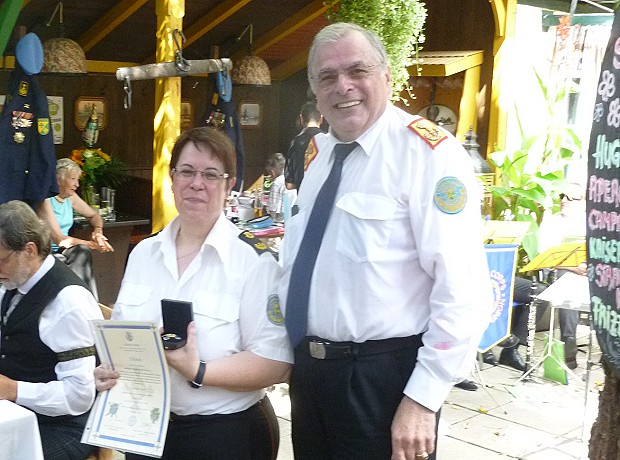 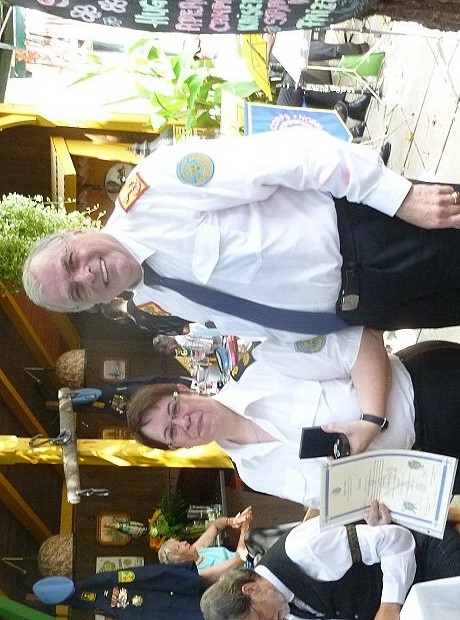 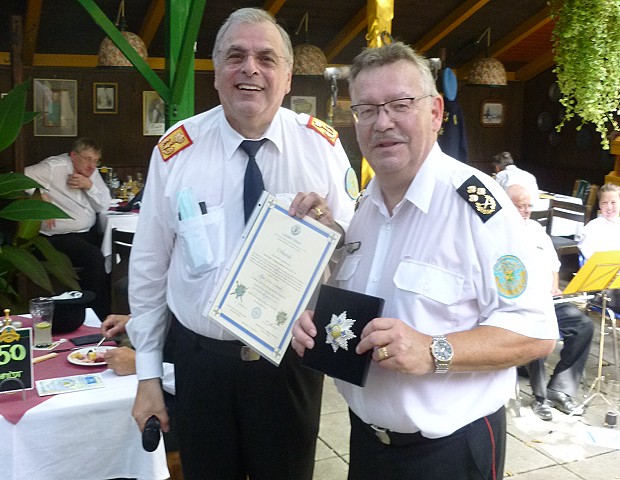 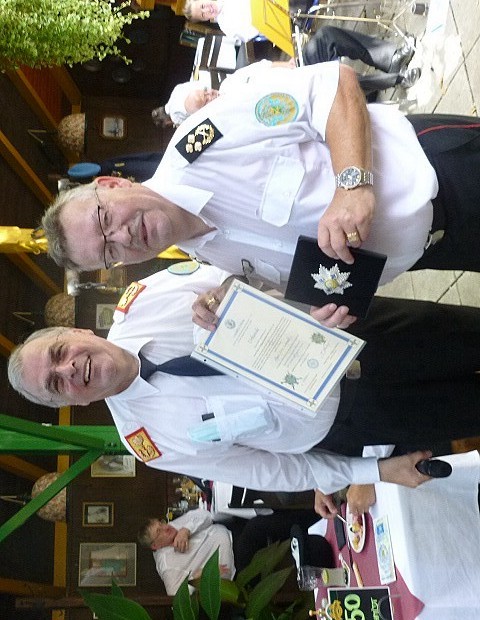 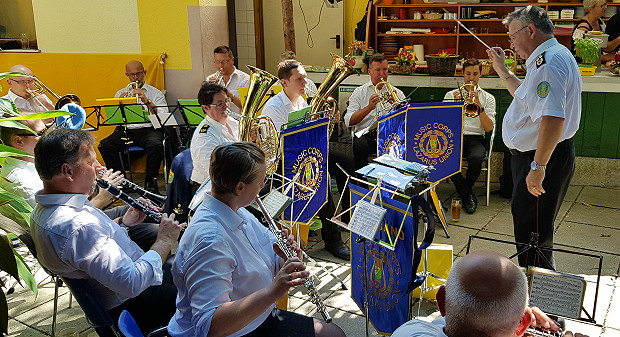 So you can say that this event to the honour of the Emperors’ birthday was very successful in glorious and sunny weather. It has to be mentioned that one could see and feel that everybody was happy was really happy to be able to play music in a good mood. Finally the musicians used the buffet. 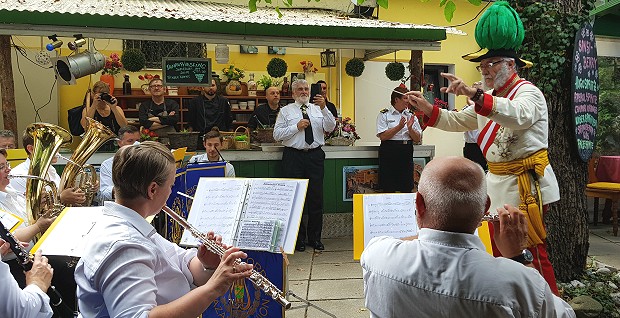