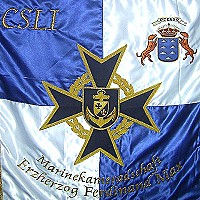 On June 22nd, 2012, seven persons gathered in El Sauzal in the North of Tenerife not only to commemorate the Battle of Lissa but also to found the naval comradeship. Two friends were on a trip through Europe but the rest showed great enthusiasm. 33 degrees were less than comfortable for those wearing uniforms but the prospect of cold drinks kept them in order. flag officer Ferdinand Graf reported the crew at order and then the Commander took over and commanded the comrades for the flag parade. Afterwards the participants received their decrees and Ferdinand Graf, as co-founder and „Spiritus Rector“ of our Marine Pool Bar received also the Commander‘s Cross of the CSLI Navy Corps. Ferdinand Graf lifted the lid on flag „Z“, quasi as an omega, documenting the temporarily finished work on the Marine-Bar a plaque remembering this commemoration.

Anita König uncovered a small monument she created, showing a dolphin, the friend of all seamen, remembering the larger monument near Vienna‘s Reichsbrücke.

After a small drink Hans König explained the past, the goals, and the future of the Austrian Naval Comradeship, the role of Archduke Ferdinand Max as Commander of the AustrianNavy and his connections to Tenerife.

Afterwards the Battle of Lissa and why this was an important day for Austria were explained to the participants, which after all came from four different countries. König‘s own oil painting of the attack of the steam ship Kaiser undermined his words.

In a friendly and comfortable way the celebration closed with fried chicken and a salad buffet.

Another marine celebration is scheduled as soon as the missing members are back from Europe.