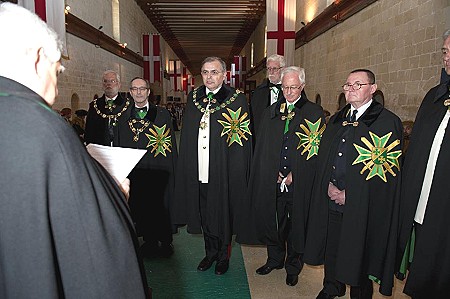 From April 18. to 22. a delegation of the Lazarus Union CSLI led by its President and Unions Commander in Chief Senator Wolfgang Steinhardt and high ranking officers of the CSLI participated at the 1. international Lazarus Symposium in Malta.

Decree of the Grand Protector of the Lazarus Union

Chain of Office of the Grand Protector of the Lazarus Union

The first two days were dedicated to the international exchange of ideas on the goals and methods of the various Lazarus organisations. Speakers from Europe andAmericapresented their organisations and goals or had discussion concrete factual issues like the usage of social networks on the Internet.

On Saturday an investiture ceremony was celebrated in the most impressive Sacra Infermeria, the first hospital of the Knights of St. John of Jerusalem´s state in Malta. This hall is 160 meters long, 10.5 meters wide, and 11 meters high.

Chaired by the Grand Prior of the United Priorates H.E. Richard Comyns of Ludston after a procession in front of the former hospital‘s gates (currently Malta‘s largest conference centre) and the marching in of the guests and delegates the ceremony commenced. Besides several new initiations and rank promotions a highlight of the ceremony was the declaration of the protectorate of the Knighthoodship of Honour of the Lazarus Union by the Supreme Grand Prior.

The day finally ended with a gala dinner of all delegates and guests in the historic  Hotel Phoenicia in La Valetta.

The end and final highlight of the symposium was the presentation of a commemorative plaque and the plantation of a tree in memory of this event, both done by Richard Comyns of Ludston together with the mayor of Tarxien.

The Lazarus Union so has proven itself personally and substantively as an essential column of the international Lazarus Organisation and the long good work of all its members has received a most beautiful confirmation.

The original wording of the approval of H.E. Richard Comyns of Ludston regarding our plea to take over the protectorate of the LazarusUnion and our Knighthoodship of Honour:

The original wording of the total ceremony will be bublished later on.

Further pictures and impressions of this investiture

Further pictures You will find if You follow the links: