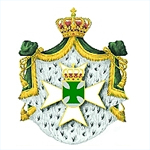 Saturday 10th November, the eve of “Remebrance Sunday” the UK Investiture of the “Commandery Edward the Confessor” of the Equestrian, Secular and Chapterial Order of Saint Joachim took place in London. The Lazarus Union was represented by its Union Commander in Chief  H.E. The Chevalier Senator h.c. Wolfgang Steinhardt GCJ, who is the Commander of the Austro-German Commandery “Leopold II. “ of the Order of Saint Joachim and two further members, the “Knight Expectants” Dr. Oswin Hochstöger (Vice-president and Deputy Commander of  CSLA) und Oliver M. Gruber-Lavin.

As venue for the ceremony St Anne’s Church which was successfully consecrated in 1730 was chosen. St Anne’s Church has a long-standing connection to the Royal Navy, and its current Rector is honorary Chaplain to the Royal Navy. Its clock is the highest church clock in London, so St Anne’s is permitted to wear the White Ensign at all times. (The White Ensign or St George’s Ensign is an ensign flown on British Royal Navy ships. It consists of a red St George’s Cross on a white field with the Union Flag in the upper canton. It was used by Nelson in the Battle of Trafalgar and became the official Ensign of the Navy in 1864). Furthermore Lady Nelson, the wife of the possible most famous member and commander of the Order ofSt. Joachim, was a regular member of the congregation at St Anne’s. The battle ensign of the recently decommissioned HMS Ark Royal is on display inside the church. At the beginning of the Investiture H.E. The Chevalier Simon Peter McIlwaine KCJ (he is also Colonel of the CSLI) was installed as Commander of the United Kingdom Commandery, England, Scotland and Northern Ireland “St Edward the Confessor“. Following that, new “Knight Expectants” were admitted to the Order and in a dignified ceremony the two Austrian “Knight Expectants” Dr.  Hochstöger and  Gruber-Lavin were promoted to the rank of a „Knight“ by the Grandmaster H.E. The Chevalier Stephen Lautens GCJ. At the End of the Investiture Chevalier Peter Wyles KJ was presented with the Order’s Benefactor Medal for his generosity in supporting the Order’s charitable work. In the afternoon the members enjoyed a special tour through the recently (21st October) opened new permanent gallery „Nelson, Navy, Nation“ in the „National Maritime Museum“ (the leading maritime museum of the United Kingdom and the largest museum of its kind in the world). Showcasing Admiral Lord Nelson’s iconic uniform with the breast star of the order of St. Joachim which he was wearing 5th October 1805, during the battle of Trafalgar, the day of his death, and personal items as well as weird and wonderful Nelson memorabilia, the gallery considers the legendary national hero within the context of his day, making sense of his achievements and dazzling celebrity while telling a wider story about British society. A walk around the grounds of the des (Old) Royal Naval College in Greenwich a World Heritage Site in, described by the United Nations Educational, Scientific and Cultural Organisation (UNESCO) as being of “outstanding universal value” completed that day.