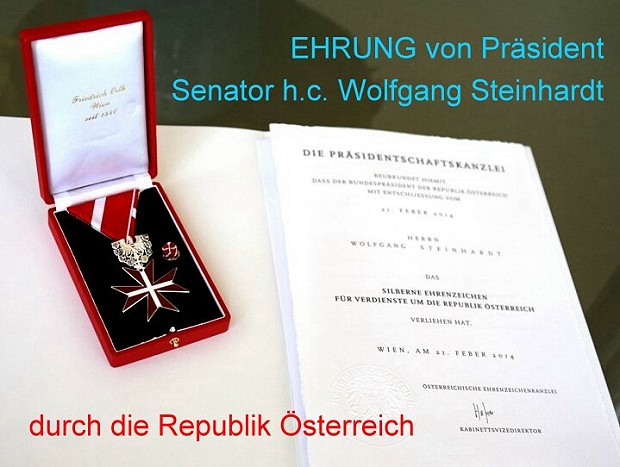 On 10. June 2014, the first president of the Viennese country government, Prof. Harry Kopietz , presented this high award to Wolfgang Steinhardt who was accompanied by his wife and some LAZARUS UNION comrades. In his laudation Prof. Kopietz appreciated the laying of the groundwork and world wide recognition of the LAZARUS UNION in being awarded counselling status at the United Nations ECOSOC by the honoured. He especially mentioned that the world wide LAZARUS UNION has its headquarters in Austria and as such provides a valuable addition to the international reputation of Austria. Over a glass of sparkling wine (Prof.Kopietz insisted on filling the glasses himself) Prof. Kopietz was informed on the Air Days and further LAZARUS UNION projects as well as the “3. International Hospitaller Symposium 2015 in Vienna“. An official welcome of the guests by the City of Vienna was contemplated. The wife of our president got flowers and finally Prof. Kopietz showed his personal “electro scooter“ in his office. The hallways of thetown hall of Viennastretch for miles and this scooter comes in really handy. Everybody was excited over this device. With this human touch (something Prof. Kopietz is known for) this moving and solemn yet especially friendly ceremony took an end. After the usual picture taking the president, his wife, comrades Monika Gries and Hans Rudolf Gries, joyfully left the place and had a little drink among friends.