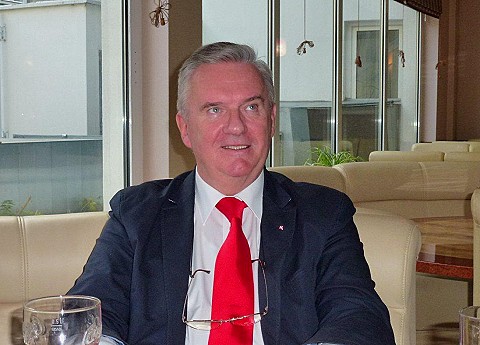 A report by „spectator“

Our vice-president  of the Navy Cameraderie Archduke Ferdinand Max (MK-EFM) in CSLI Navy Corps and in the Austrian Navy Association, celebrated his 70th birthday at 8.Nov.2012. To mark this anniversary, and to honor his many years of service as the “Super Photographer of the CSLI of the Lazarus Union” any loyal member, Colonel CSLI Hannes Hochmuth, as the second member of the Lazarus Union (after our chairman of the advisory board, Colonel ret. Adolf H. Neidhart), was awarded with this very rare given award, the “Grand Cross of Merit Medal of the Lazarus Union”. In a small ceremony on 13.11.2012 Hannes Hochmuth were presented the insignia of this very high and very rare this award. In his speech, the president of the Lazarus Union pride the companionship, the loyalty and the reliable long-term service in the accordance of our guiding principles and shared values of our comrade and friend Hannes Hochmuth​​. The MK-EFM, the CSLI Navy Corps and the entire Lazarus Union congratulates.