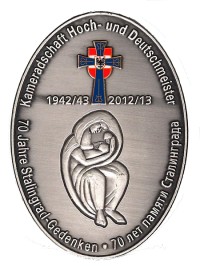 A Memorial Mass in the Collegiate Church of the Holy Cross, Vienna and a Commemorative Concert in the Russian Cultural Institute for the 70th Anniversary of the Battle of Stalingrad History of the Tragedy:

On the 2nd February 1943 the remnants of the German 6th Army surrendered to Soviet troops atStalingrad. This Red Army victory over the Germans is regarded as one of the turning points in World War II.

The months-long battle, in temperatures down to minus 43 degrees, cost the lives of least 150,000 Germans, tens of thousands of their Allies and 500,000 Russians.

Of the approximately 91,000 German soldiers who fell into Soviet captivity, only 6,000 returned home.

An image of the Virgin Mary, ’The Stalingrad Madonna’, was drawn by the senior German physician Dr Kurt Reuber during the battle to inspire his patients. It is featured on the 70th anniversary commemorative plaque.

To mark the 70th Anniversary of the end of the battle a memorial service was held in the Collegiate Church of the Holy Cross,Vienna. A strong delegation from the 44th ID “Hoch-und Deutschmeister” Comrades Association was present to commemorate fallen Members and their German comrades. In memory of their fallen comrades they began by marching in their traditional Banners to join those of the Kameradschaftsbund (Association of Comrades) and the ÖBH. The service was celebrated by the Military Dean, Peter Papst M.A.. Also present was the bishop of the Russian Orthodox Church, the Orthodox Military Chaplain, Father Lapin, and representatives of the Diplomatic Corps. There was also a strong turnout from several traditional clubs and a small number of former soldiers and participants in the battle. The Lazarus Union was represented by President Steinhardt and comrades Kadlec, Ptak, Hochmuth and Gruber.

In his sermon The Military Dean recalled the events of that time: During the course of the fighting about 1 million people (civilians and soldiers) were killed. The majority did not die in combat action but froze to death, starved or fell victim to disease.

Also recalled was the Austrian memorial in Pestschanka and the inscription on its bronze plaque, which reads:

“This memorial is dedicated to all the victims of the Battle of Stalingrad 1942/43, it reminds us of the suffering of the soldiers who died here and of the civilian population. For those from all countries who died here or in captivity we ask their eternal peace in Russian soil. “

A prayer in the Orthodox Rite ended the religious part of the service. After a short speech wreaths were laid. The ceremony was completed with the playing of The Deutschmeister March. It should be added that, by resolution of the City Council, on the 70th anniversary Day of Remembrance for the defeat of Hitler’s 6th Army, Volgograd will again bear the name Stalingrad. This new rule will also apply on 9th May (Victory Day) and on four other commemorations during the year.

Two days later, on 4th February 2013, the Russian Cultural Institute also held a memorial service in memory of all the fallen at the battle ofStalingrad. The program included an impressive documentary photo exhibition from the collection of theCentralMuseumof the Great Patriotic War of 1941-1945. The pictures, some on show for the first time, clearly depicted the misery of war. The exhibition was opened by Counsellor Tatiana Mishukovskaya. Her speech revealed the extent to which the events of that time are rooted in Russian collective memory. This was followed by an impressive concert: “Songs of the War Years”, with Dmitri Kostov (bass), a member of the Vienna Folk Opera, and Irina Dankewitsch (piano). The songs were performed in German and Russian. Only a few remaining veterans of the Battle of Stalingrad could attend the event. On behalf of the “Hoch-und Deutschmeister”, Section Chief ret. Dr. Otto Gratschmayer gave thanks for the successful event. Representing the CSLI were President Steinhardt and comrades Kadlec, Ptak and Hochmuth. Our comrade Hannes took the excellent photos, ​​as usual. Many thanks to him for that!

50th Anniversary of the FFWPU Europe