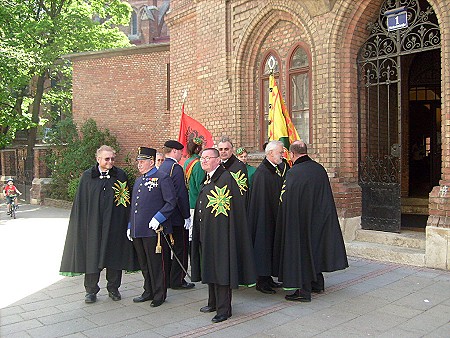 The Festival Mass was celebrated by Don Pren Kola (recipient of The CSLI Medal of Humanity). Because of the festive occasion, the ‘messe breve’ by Leo Delibes was performed by singers of the Diocesan Conservatory of the Archdiocese of Vienna. The procession moved through the sunnyChurch Squarein front of the Church. During the sacred Acts of the Holy Mass, shrouded in incense, could be heard the mighty organ ofRudolfsheimChurch. Besides members of the Knighthood of Honour of the Lazarus Union, members of the Brotherhood of the Holy Archangel Michael and the K. St V. Rhaetia also attended the celebrations. The Albanian flag bearer was accompanied by an Officer of the Deutschmeister Schützenkorps. Many new friends were made as, with Albanian specialities and Austrian beverages, this holiday slowly and pleasantly came to an end.