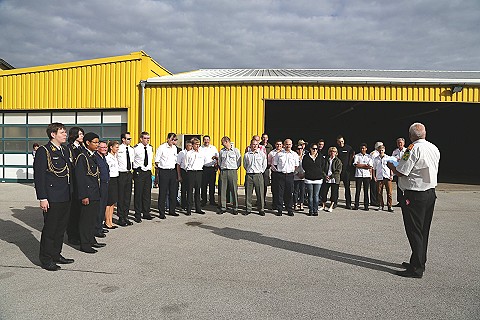 For the 7th time the LAZARUS UNION CSLI invited round to its air day for humans with special needs, held on Stockerau airfield.

About 250 participants of all ages from kid to senior citizen took the chance to experience this event, among them many long-time guests from the Austrian aiding association for the blind and deaf, the homeless place “Vinzi Rast“, Special Homes Stockerau, the Odilien residential community, and may other organisations. They had a chance to fly in helicopters and airplanes and participate also in our supporting program. Many showed great anticipation already. They were also supported by more than 100 voluntary assistants.

My day started at 5:30 with the alarm going off. After several failed attempts I succeeded in getting up, it was still dark. I would love to go to sleep again.

I am happy to be at the meeting point 30 minutes early – an once-in-a-hundred-years event. Only our official photographer Hannes Hochmuth was already there.

The president gave both of us a ride to Stockerau. There his first job was to report the event with the local police. At the airfield many assisting hands were already present and after a short numbers call the setting up commenced. Preparations had already been done the day before and a small team had already set up fridges and tables at the hangar.

Job priority list: 1. Get the planes out, 2. Clean the hangar, 3. Set up benches, 4. Prepare barriers. The tasks are executed swiftly and so our president could have his favourite drink (hot chocolate) at the airfield cafeteria at 9:45 already.

I care only little about these activities as my job is setting up the information desk. This task needs to be finished by 9:00 – the time the first guests usually turn up. The information desk is the first contact point for our guests. Here they get their boarding passes and vouchers for food and drinks. They have to sign the transportation contract and can get any other information needed.

At the start there is always an ample amount of confusion, also because our information desk was understaffed this year. Stand-by flights have to be assigned or are rebooked, lists have to be filled out, questions need to be answered. The most asked question was “Is there another helicopter flight available?“

The biggest challenge this time was the dear wish of a person in a wheel-chair to get a helicopter flight. While this sounds like an easy wish for the LAZARUS UNION the problem was that the guy weighted 190kg! So the challenge was a little bit tougher but our flight assistants managed without problems. The flight took place and the joy in the face of the passenger was a big reward.

At 10:00 there was big engine noise, the first squad took off. The flights are executed in squadron form, which means that all planes are loaded at the same time and take off in rapid succession, also arriving back home almost the same time. This improved quick passenger greatly.

The helicopter pilots had their own routes, flying to the danube power plant or to other places.

At the same time RADIO LAZARUS went on air. Our comrade and protocol officer LtCol. Rudolf Murth was a perfect radio host, providing a variegated music program and also playing songs on public demand. Interviews describe our jobs and important event information for our guests are announced.

11:00: Deep engine sounds. Our friends from the Harley Davidson Club arrived, led by comrade Hans-Rudolf Gries. What an impressive picture. The audience gazes in wonder, as always, and lines up for pictures.

At the same time the lunch catering for our guests begins, as always organised by the FSV 2000. The supporting program commences with old-timer car tours, which are much in demand, and also airfield tours.

The Spillern fire department displayed their fire engine Mercedes 408 D from 1968. Langenlois fire department displayed their extension mast platform TMB 32: MAN 1830, 350 PS, Bronto Skylift , built in 2010. This is a special vehicle providing altitude rescue and fire services up to an altitude of 32m. This of course provided for some nice views of the airfield and the actual events.

To our great pleasure also Mr. Manfred Klahofer came with his 1927 fire engine AUSTRO FIAT AFNL. This car was resting at a playground for 50 years before he restored it to its old state, taking 5 years of tedious work.

The Ford Mustang Coupé, 1966 from the old-timer museum Koller was driven around by Honour Knight Ing. Peter Steinbach.

President Werner Gradisch of the Bugatti club Austria surprised us with his Bugatti T44, 1927. Motor 69×100/2991ccm, 80 HP, top speed 140km/h, auto body Frugier. This vehicle is one of a kind as by then cars were delivered without body which was then manufactured on demand of the owner. To me a most impressive vehicle.

A “Willy’s Overland Jeep“ from 1943, from August 1945 to September 1946 the standard vehicle of the “International Patrol“ was on display, used by then in Vienna by the Allied Military Police, manned by one US, one British, one French and one Russian MP, called “The four in the Jeep“ by the locals.

I hardly notice any of those activities as I sit with my information desk close to the entrance, far away from where the show takes place. There is little time for short exploration trips.

But despite all this hectic rush there is time for some amusing occurrences: near the end of the event a man approached me, asking if there are still food vouchers. I think he is a passenger and tell him, “Did you have your flight already?“ – “Yes.“ – “So there is a voucher in your envelope.“ I polish him off, not listening any more to his speech. A few minutes later he comes back with a comrade – the alleged passenger turned out to be of our pilots…

The finish was once again a successful concert from the Big Band of the LAZARUS UNION inside the hangar: A tribute to Glenn Miller and his contemporaries, directed by CSLI BrigGen. Friedrich Lentner.

After an intermission the president awarded some distinctions: the Officer‘s Merits Cross to LtCol. Rudi Murth, the President‘s Cross of Honour to Staff Sgt. Vzlt Werner Winkelhofer, the Knight‘s Cross of Merits to Ing. Peter Steinbach, to Monika and Hans-Rudolf Gries the Merit‘s Cross, and to Lukas Valenta the Service Distinction of the LAZARUS UNION.

After the event closed the cleaning up started immediately and the airfield was prepared for normal operations. Although only a few assistants remained the job was finished quickly.

To our great pleasure also the 7th air day ended without any events or injuries. A professional cooperation shown by all our volunteers. Thank you very much for the commitment.

I hope we were able to provide some pleasure to our guests with this event.

We had support by the CSLI Air Wing, the Flugsportverein Stockerau FSV 2000, the Fliegergruppe Wien, the Lazarus Union Music Corps, the Marinekameradschaft Vizeadmiral Erzherzog Ferdinand Max, AERIAL Helicopter, the voluntary fire brigades from Spillern and Langenlois, the Katastrophenhilfsdienst Wien, the Feuerwehrjugend Wien, the old-timer museum Koller, „Die Vier im Jeep“, Manfred Klaghofer, Bugatticlub Austria, Harley Davidson Club, NÖ Kameradschaftsbund Stadtverband Mödling and Perchtoldsdorf, soldiers from the Guards Regiment of the Austrian Army, the Austria Humanitas Corps – AHC, the Grand Priory Austria of the Order of St Lazare, PR-Plus Werbeagentur, and many individual assistants and donators (I just hope I did not forget anybody!)

The Flugsportverein Stockerau FSV 2000 (honourable member of the LAZARUS UNION) again provided the complete airfield infrastructure for free, provided lunch, and most of the aircraft.