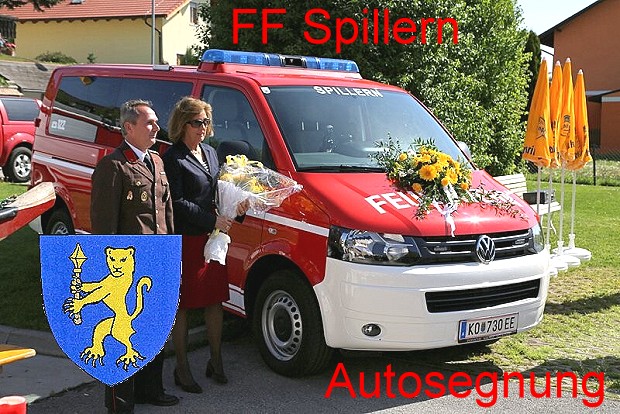 A Lazarus Union delegation participated in a ceremony of the Spillern Voluntary Fire brigade
on 27. April 2014.

A report by Erich Kadlec
Pictures by Hannes Hartmuth

The occasion was the blessing of the newly purchased personnel carrier. Also the youth fire brigade celebrated its 30. anniversary. A service was held, celebrated by parson KR Msgr. Franz Forsthuber, at the same time a celebration of St. Florian.

Sponsors for the blessing of the vehicle were Mrs. Bettina and Mr. Georg Waldstein-Wartenberg. Fire Brigade Chief Adolf Huber welcomed the guests. He reported that it was necessary that a new personnel carrier had to be acquired as the old one did not get any further operating approval. This purchase was also supported by the county fire brigade union of Lower Austria.

Among the various salutation speeches was also one of the mayor and fire brigade chief of Kanice, a partner voluntary fire brigade from the Czech Republic, near Brno, founded in 1892.

Ing. Vlado Kalivoda reported that in his community a youth fire brigade team “officially“ exists since 14 years. But some 80 years old men tell that there already was a “youth fire brigade“ when they were young guys. The youth fire brigade in the Chech Republic is organised a little bit differently, more like the former “pioneers“. They engage in many more different activities like wood camps or even rifle shooting.

To help your neighbour is very much in the sense of our “knightly ideals.“

Some comrades from the Spillern Fire Brigade publicly received LAZARUS UNION awards for their support during our last Air Day.

The fire brigade also promoted some of its members to higher ranks, namely Ing. Mag Antony Andres and Josef Kühner.

A morning pint accompanied by thy fire brigade music corps from Enzersfeld finally completed the event.

We thank the photographer for these wonderful pictures!