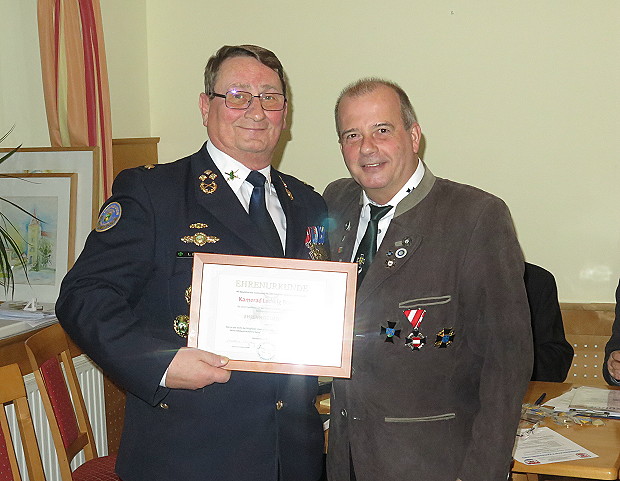 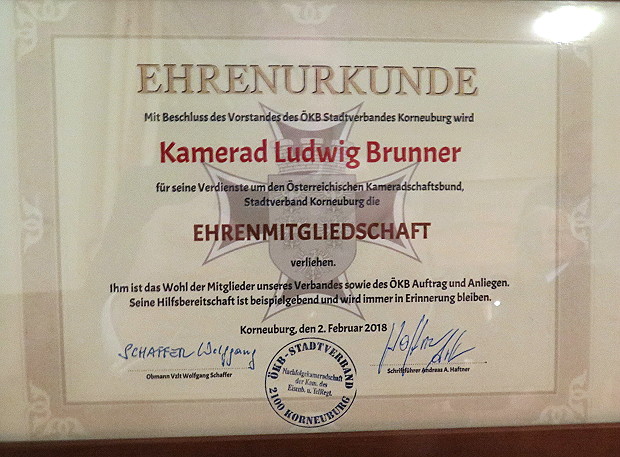 Friendship does not only the connection of two souls but also the respect towards the things that are different concerning the other person and has to go in another direction. Good friendship means getting commonly older but developing individually.

During the annual general assembly of the Austrian Veteran’s Association – municipality Korneuburg – on February 2nd our Vice President Ludwig Brunner was appointed honorary member of the municipality.

In addition to the mandatory reports of the members of the Executive Board on the activities during the past year there was also a preview for the upcoming dates and events in 2018. A special event in the summer will be the 152nd anniversary of the municipality Korneuburg with a great Programme.

The unanimous appointment of Ludwig Brunner as honorary member of the Austrian Veteran’s Association – municipality Korneuburg was especially satisfying. Since 2016 Ludwig has been an active member of the local section Sierndorf. In recognition of his service and being a “shining example” he was now awarded by the executive board of the municipality Korneuburg with an honorary certificate. The whole general assembly awarded him by appointing as honorary member.

We would like to take this opportunity to give Ludwig an honest compliment and to express our deep gratitude for his many years’ active work for the well-being of our community of values.
We also would like to congratulate him to his cautious good-fellowship and very successful work for the Austrian Veteran’s Association. We also want to express our most sincere and firm respect.

The Austrian Veteran’s Association can be proud to count a person of its members with such high qualities like Ludwig has.

The Veteran’s Association expresses its great admiration and gratitude.