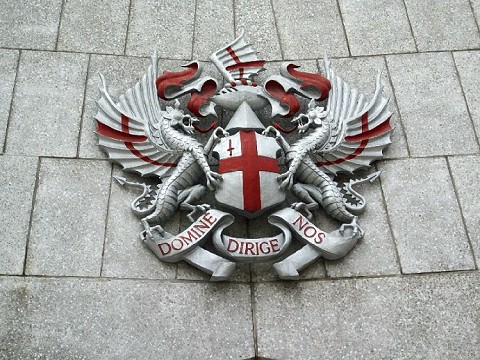 At 11.30 on the 17th of June 2013, a City ofLondon Beadlein top hat and frockcoat escorted CSLI Major Mike Boxall and his guests into the Chamberlain’s Court at Guildhall for the ancient ceremony granting the Freedom of the City ofLondon. First recorded in 1237, ‘the Freedom’ traditionally recognised that a person was free of feudal service and recorded their right to trade in the square mile of the City ofLondon. Today these trade rights no longer apply, but the Freedom of the City remains a unique part ofLondon’s history to which many people who have lived or worked in the City have been proud to be admitted.

Kindly nominated by Freemen of the City and senior CSLI GB&I officers Ian Tough and Simon McIlwaine, proud Londoner Mike had come to swear the ‘Declaration of a Freeman’ before the silk-gowned Clerk of the Chamberlain’s Court. After signing the Freeman’s Declaration Book, he was presented with a hand-inscribed parchment Copy of the Freedom. The Clerk then extended the right hand of fellowship to welcome this newest ‘Citizen of London’. Like the CSLI, the Freedom does not discriminate on grounds of religion, social status, ethnicity, sex or age and all fees go to charitable causes. Mike was therefore doubly proud, as a Londoner and as a CSLI member, to receive this formal recognition of his personal connection with the City ofLondonand its traditions. CSLI GB&I – Visit to the Shard