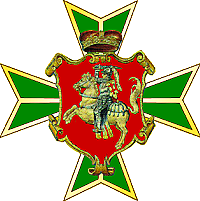 2018 marks the fourth anniversary of the Lithuanian Saint Lazarus Corps, and a special event of this year – CSLI’s President, Professor Wolfgang Steinhardt with his wife Vera, were invited by the leadership of the LLC, to visit Lithuania from 29th August to September 3rd.

During their official program, Mr. Steinhardt and his wife visited several major cities of Lithuania, had various meetings with regional authorities, heads of state institutions and non-governmental organizations. They also visited some of the historical and cultural sights of Lithuania, to become acquainted with the history of Lithuania more closely and to experience some cultural and social parallels between Lithuania and Austria in their 6-day visit.

The main objectives of the CSLI leader’s visit were the representation and promotion of the Lithuanian Lazarus Corps as a member of the international CSLI organization network, by positioning its activities in strategic partnerships and cooperation directions with related Lithuanian non-governmental organizations, cultural and educational institutions and potential social partners in expanding the activities of the Lithuanian Corps. Also, the effective social development, education, cultural cooperation and technical methodological development of the CSLI base in Lithuania.

In the latter perspective, special attention was paid to a visit to the Pociunai Aviation Plant and the Aviation Club. Famous for the organization of the European and global gliding championships. Here the CSLI delegation was introduced to the history of the aviation factory, which was strategically important during the Soviet era, as well as the features of today’s production and its capabilities.

On the same day, the delegation visited Prienai Municipality. During the meeting with the mayor of Prienai district, Alvydas Vaičekauskas, Vice-Mayor Algis Marcinkevičius and the director of the administration Egidijus Visockas, Prof. W. Steinhardt introduced CSLI ‘s history, goals and values. He presented the CSLI awards, expressing the hope that the planned co-operation plans would be realized successfully and will provide additional opportunities for both sides. The Prienai leaders in return, presented souvenirs to the CSLI president representing the Prienai region.

Also visited was the impressive water-castle Trakai. A possible place for the next investiture?

There was also a meeting with the representatives of the Lithuanian Riflemen Union, the member of which is Egidijus Visockas, the Director of the Prienai Municipality Administration. This meeting was also attended by Maj Žydrūnas Šadauskis, Head of Kaunas Enrolment Centre of the Military Enrolment Administration Service under MoND of Lithuania, the Deputy Commander of the Lithuanian Riflemen’s Union.

After this official visit, an excursion took place to the historic Prienai Museum of Lithuanian folk ethnic culture, where members of the delegation were hospitably received by the museum’s director, Mrs. Lolita Batutienė. Delegates saw the antique buildings and an exposition of the post-war partisan resistance of the region.

Afterwards, the CSLI delegation headed by Egidijus Visockas, Director of the Prienai Municipality Administration, and Leonas Sakalavičius, a member of the Prienai Regional Museum, visited a partisan bunker, where partisans had fought against the Soviet occupants in a remote forest.
The guests from Austria were left with a deep impression by this tragic fate of thousands of people and the history of Lithuania, still insufficiently highlighted in the western world.

Deeply moved by the ideals of the selfless Lithuanian partisans’ fight for freedom, their courage, loyalty, personal dignity and statehood ideals. The President of CSLI expressed his condolences and showed his deep personal respect by his knight gesture to the freedom fighters.

The next most important goal of the visit was the inauguration of the new members of the Lithuanian Corps, which took place in Kaunas, at the St.Michael of the Arkangel Church. The priest of the Catholic and Evangelical Lutheran Confessions, conducted the solemn ecumenical worship in the presence of the Pastor of the Church, Rector Fr. Tomas Karklys and Saulius Juozaitis, Pastor of the Evangelical Lutheran Parish of Kaunas.

It is worth noting that Aleksandr Isakov, a music virtuoso of Belarusian nationality, was granted, Lithuanian citizenship by the former President of Lithuania, Valdas Adamkus, after evaluating Isakov’s musical talent and exceptional contribution to Lithuanian culture.

After the inauguration ceremony, the delegation of Lazarus Corps headed by G.Petružis, leader of the LLC, and Prof W.Steinhardt, the CSLI Commander in Chief proceeded to the Military Museum’s garden to lay a wreath at the grave of the Unknown Soldier.

After this official ceremony, everyone gathered for the reception at the Kaunas Lithuanian Armed Forces Officers’ Club “Ramovė”, where informal discussions took place with the sponsors and friends of the Lithuanian Lazarus Corps.

There was also an impromptu concert in the Kaunas Lithuanian Armed Forces Officers’ Club Hall by organist Aleksandr Isakov and soloist Laima Žilytė.

Those present were able to get acquainted with the unique and historical exposition at the Officers’ Club Museum, which was initiated by the presiding officer of the of the Club, Major Donatas Mazurkevičius and dedicated to the Ukraine’s fighting history of nowadays.

The culmination of the visit’s agenda was a concert at the Pažaislis Music Festival at which Prof W. Steinhardt, awarded Prof Petras Bingelis, manager of the Kaunas State Choir, the high ranked Order of The Great Cross – acknowledging the special merit made by the maestro in the arts and his significant contribution to European culture.

This ceremony was acknowledged by a standing ovation by more than 4,000 people in the concert audience. It was a truly spectacular event and an incredible representation of Lazarus Corps to the Lithuanian cultural community.

The last day of Prof W. Steinhardt and his wife’s visit was spent in Vilnius, where a meeting with the heads and members of the Lithuanian Lazarus Corps’ Vilnius team took place. Also, with the International Vilnius Business and Law School, headed by Gintautas Šiškus, Commander of the Lithuanian Lazarus Corps’ Vilnius Division. The CSLI president met with students at the school and made a presentation entitled “The United Nations: Challenges and Opportunities from the Perspective of CSLI”.

Prof Steinhardt’s visit was completed by a fraternal dinner meeting at one of the Old Town’s restaurants in Vilnius, where officers of the Larazus Corps listened to a report by the Commander of the International Corps, Prof Steinhardt and the Chief of Staff of Lithuania ‘s Lazarus Corps, G. Petružis. Also, important, was the exchange of views, ideas and insights on the future of the Lithuanian Corps’ development prospects and strategies.

The CSLI leader’s visit undoubtedly served to promote a better awareness of CSLI in Lithuania, to inspire the members of the Lithuanian Corps, rise new ambitions and challenges, and of course, to leave unforgettable impressions and experiences.

Vera and Wolfgang, we wish you the best of luck in life and your important global mission! On behalf of all the members and friends of the Lazarus Corps, we say one more THANKS! for your friendship and our great time! We also sincerely thank all our friends who have contributed in organizing of this visit!

On their farewell, you can see Wolfgang and his wife, dancing (CLICK) the waltz to J. Strauss’ “The Blue Danube” which was played on Gintautas Šiškus’ mobile phone.

Pictures in the English version will come soon! For the time, the pictures are available in the German version.

A Project of CSLI Swizerland

CSLI Italy “Girl Up” Project no.2