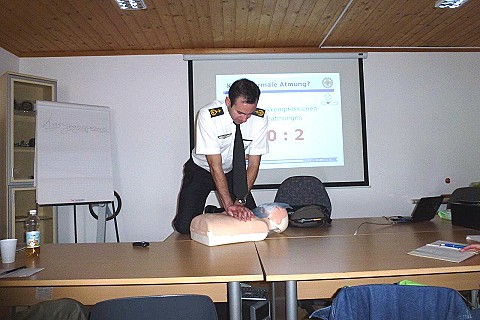 Some time has gone by since I last completed a first aid course, so I clearly needed to do this.

Promptly at 10 o’clock all participants met, some having a small coffee, some swearing by cocoa, then on the classroom.

After some introductory words from Senator Wolfgang Steinhardt, our Doctor took over. I was amazed to hear how much everything in medicine has changed.

We learned about injury, disease, poisoning, what constitutes an emergency, diagnosis and emergency response. What immediate life-saving measure should I take? Personally, I knew the general information signs for dangerous substances mean danger; I’ve seen them a hundred times, but what else?

With many practical examples, and his own experience, Dr. Halat told us how to behave and help in rescue operations. In a car, turn off the engine and remove the key before moving the person because of the airbag, then remove the belt and turn the waistband over. As an old biker it was for me quite new that the safety helmet must always be removed. To support the theory, learning on a living subject immediately followed. Each attendee took his or her partner and tried to get them into the recovery position, here I would like to mention what a difficult patient our ‘injured‘ senator was – his first aider had some trouble with his rescue!

Next the artificial body, ‘Anna’, was used as an emergency motionless patient to test the procedures for checking consciousness: sight, hearing, touch, cries for help; then respiratory and circulatory checks before carrying out resuscitation at 30:2. Next the defibrillator was explained and used. The whole process is not easy, in time of emergency I hope I’ll do everything right. Tired, but richer in experience, we took a break for lunch.

Afterwards we were shown the measures to take for heavy bleeding: finger pressure then adding a dressing. Again we practised on a living subject, the artistic application of ‘blood’ causing some mirth. Taking care of the arms was no problem, but on the legs, the triangular bandage was too short…

Following a recap, everything we had covered was checked in a test to see whether what we had learned had stuck (again, not in the documentation). Anyway, all participants managed to pass the exam, a relief for everyone, and certificates were distributed and accepted with pride. Finally we went to dinner in a welcoming Stockerau Inn.

Summary: well presented and explained by Dr. Gabriel Halat, I believe each of the participants took much new learning home, and we’ll proudly wear our silver CSLI ‘wings’, although maybe a red cross on them might be a good idea.