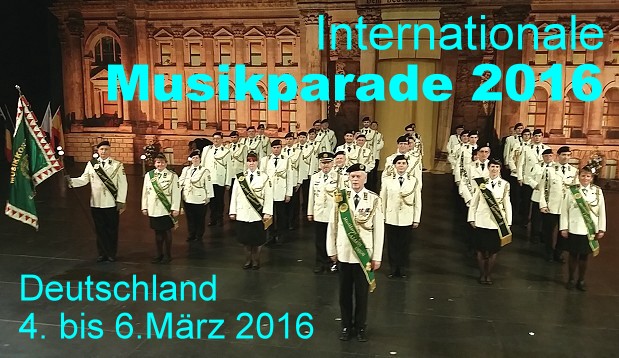 Music Corps of the Lazarus-Union

on tour in Germany

This month the Music Corps of the Lazarus Union directed by our Excutive Bandleader Friedrich Lentner, who had established the contact, has taken part in Europe’s most successful tour marching bands.

Within three days the orchestras had 5 presentations in Würzburg, Kempten and Stuttgart with more than 12.000 visitors.

Next to the Lazarus Union the following bands have taken part: The “United Highland Pipes and Drums” from Scotland, the “Spielmanns- und Fanfarenzug Rückers” from Germany, the “Military Orchestra Tschernigow” from Ukraine, the “Military Orchestra of the National Brigade Nr. I” from Moldavia, the “Marine Orchestra Pstrong” from Poland and the “Bersaglieri” from Italy.

All these orchestras presented shows with excellent choreography. However the Music Corps of the Lazarus Union had not to hide behind.

It was the second largest orchestra of all participants and so it filled the show area perfectly. Because of several light effects the white uniforms came to retribution very well.

The Music corps got a lot of praise and recognition by other orchestras and the audience. The show program, established by stab leader Herbert Partl, was very sophisticated and varied, it was entitled „A Colorful Musical Greeting from Vienna“.

During the show there was no standstill because the musicians moved constantly. One highlight was the singing performance of the soloist Michael Wagner who once again fascinated the audience with his extraordinary voice.

He sang many songs which were related to Vienna and also songs from operettas with a reference to Vienna. The whole hall was in elation at the final in which not only all orchestras took part but also all soloists gave their very best.

Our President Senator Wolfgang Steinhardt who accompanied us and who did not miss any presentation was more than satisfied with his young orchestra and would not have thought it possible to achieve such a great performance within such a short time and with such a low number of orchestra trials.

Because of the success and the enthusiasm of all musicians it is guaranteed that further show appearences will follow.

Therefore the Music Corps of the Lazarus Union showed that it is a welcome guest well beyond the Austrian border as a representative of music from Vienna.